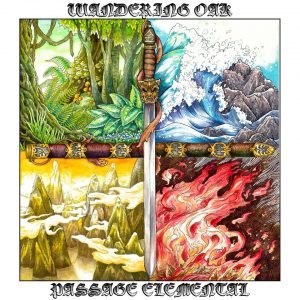 This fall/winter is chock full of more releases than you can shake a stick at. There is no bigger one-two punch in my mind than on November 1st coming from the northeast US with the newest album from Wilderun and the long-awaited debut by Wandering Oak. Entitled “Passage Elemental” it is the long overdue follow up to the brilliant EP “Advent” from 2015. Featuring 7 tracks with a playing time of 52 minutes, it will be out on their Bandcamp page for download and as a physical release. Why such a long delay in between releases? A move of locales (Massachusetts to New York) plus a stable lineup/changes I’m sure were contributing factors. Main man/multi-instrumentalist Robert Pollard has stayed the course throughout and has persevered to release this opus with members from some of the finest acts around. Joe Leising (Ferus Din) on guitar, Dee Ethier (Goblin Hovel) on bass and Monica Finger (Elfspell/Mavradoxa) on drums is who you should expect to see on tour and they acted as guests at this point on the album….. assumption is this will be lineup going forward. Whatever the future holds, the fire is brought in heavy doses on “Passage Elemental”. First off, a killer album cover by Autumn McGee sets the mood for the internal contents perfectly.  While Wilderun take the semi-traditional path of progressive music, Wandering Oak goes I feel in a more raw, aggressive and with semi-reckless abandon sort of path. There is definitely a throwback vibe to some of those off the beaten path thrash bands like Voivod, Coroner and Mordred (or a big chunk of the old Combat catalog) with elements of classic 70’s progressive acts like Rush and King Crimson and NWOBHM woven throughout here. Of course, there is folk instrumentation sprinkled in for good measure (whistle primarily) but for the most part this is still guitar driven. Rob is one of those unique vocalists who can successfully pull off a baritone style and a death/black style equally well and uses both in equal intensity throughout the album. Categorically, it is hard to say exactly where they land as this isn’t black metal (maybe at points) but it is heavier than most folk metal acts….. maybe dark folk like Duskmourn and Amiensus? Close enough for me. Tracks range from 4 minutes (acoustic guitar instrumental “Aethereal Path”) to 12 plus (“Son Of The Sky”) and every length of track works, especially the longer ones where the frenzy is reserved and makes way for interlude built tracks and more mood. I found myself humming both vocal lines and guitar riffs on multiple occasions at work…. `yes there are a lot of catchy parts here. The new members all crush it on here, bringing energy and their collective personalities and talents to the album. Highlights for me? “Upon Stranger Shores” definitely is one for sure with a blend of acoustic and heavy followed by the hellish “Set My Thorns Ablaze”. I think that the question will arise where this fits in and for those that try to find a nice tidy spot for it will spend a lot of time for naught. The mix and overall sound have a nice edge and retro feel….gnashing guitars, punchy lows with great separation and accessibility while still being raw and aggressive. Coming at progressive music from a different angle altogether, Wandering Oak have put together an epic debut that shows perseverance pays off in spades and definitely will be in top debuts for 2019 for me.