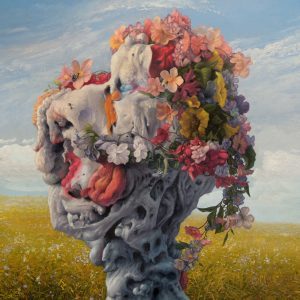 If asked what US band is on the brink of major folk metal stardom, Wilderun would probably be at the top of a very short list of acts. With 2 incredibly epic albums under their collective belts, this Boston based troupe is ready to unleash their 3rd and most mind-altering opus in “Veil Of Imagination”. Featuring 8 tracks at a robust 68 minutes, “Veil….” will be officially out on November 1st as an independent release.  I know a lot of people tend to throw the word “progressive” around a lot when describing music and this latest offering will bend the rules for what “progressive” is in a folk metal context. If you are a fan of acts such as Opeth, Ne Obliviscaris and for our specific sub-genre, Xanthochroid then you are going to be all over this.  Just from a pure listening perspective, I’m telling you right now to cancel your plans and get ready to envelope yourself in this album as it requires your full attention. I tried doing it semi-piecemeal and it doesn’t have the same effect to try and dissect it one track at a time. Right from the start you get sucked into almost 15 minutes of pure epic in “The Unimaginable Zero Summer” which has all the Wilderun trademarks….sweeping riffs, clean and rough vocals, time changes, interlude parts, tempo changes…….and you are just getting started. In the context of the whole album getting hit with this right at the beginning is a little off putting but hang in there. Unless you are really looking, the tracks really tend to weave into each other and I’m sure an argument could be made that this is one long track split into separate ones for easier consumption. There is also some information regarding this being a conceptual album but if it is it doesn’t really have the tangibility of it. The middle part of the album (tracks 2-6) are more accessible from a length point of view (3-9 minutes each) but no less overwhelming in terms of their quality and adventurousness.  First single “Far From Where Dreams Unfurl” was the perfect track to release as it shows a wide range of what they have to offer and I think is the catchiest. Tracks 4 and 6 are similarly titled (“Scentless Core (Budding)” and “Scentless Core (Fading”) but since they aren’t right next to each other it raises the question of whether they are tied together or not beyond the name. The album closes with two monsters….the almost 10 minute “The Tyranny Of Imagination” and the 12 plus minutes of “When The Fire And Rose Were One”. Just when you think they could be running off the rails, they close the album strong with equally quality tracks. How are they going to pull this stuff of live? Well I’ve seen them and I’m sure it will be done. The sound is immense as it should be to keep up with all of the detail and nuances needed to capture everything happening here. Two words came to mind while listening…..overwhelming and fearless. This is a huge step forward in their progression but one that seemed attainable after “Sleep At The Edge Of The Earth” and now you know what they have been doing for 3 plus years……crafting one of my favorite albums in 2019.