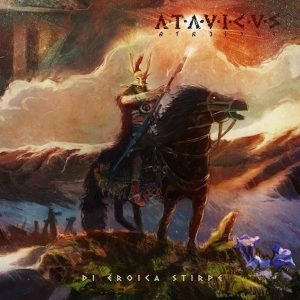 Usually this late in the year, my lists are already sorted out for the best of the year categories. This year has made me change many a list with the latest from Baldrs Draumar, new project Shrine Of Burls and now the debut full length from Italy’s Atavicus. Entitled “Di Eroica Stirpe” (“Of Heroic Lineage” works for me), the album has 8 tracks totaling over 52 minutes of tuneage. Two recently released singles (“L’Ardire Degli Avi” and “Safinim”) both appear on here so 6 newer tracks besides those. Usually, I do think of up-tempo, pretty folky or power metal acts when I think of Italy…..Kanseil, Lou Quinse, Ad Plenitatem Lunae, Elvenking…..and Atavicus fits in with none of those categories/acts. Reading their brief history, you will know why. Formed out of the disbanding of Draugr in 2013, members split into 2 new awesome acts…..Atavicus and the mighty Selvans. While Selvans went into the darker/forest dwelling/black metal route, Atavicus went more to the pagan/battle metal path. I think an obvious comparison would be Italy’s answer to Immortal (after all they covered “Tyrants” on their first EP “Ad Maiora”) plus I would add in some Forefather and Iron Woods. There are a wide range of track lengths here…..just over 2 minutes (interlude piece “Consacrato All’Eterno”) to almost 11 (“Safinim”) with the others being in the 5-7 minute range. I am a fan of relentless riffing and “Di Eroica Stirpe” is filled to the rim with them….not overly complicated but just one after another in wave after wave. However, the guitar is not necessarily the dominant riff bringer as the keys/orchestration play a major role in defining the tracks. Vocals are of the black/death variety with lyrics in Italian and work well with the frantic pace and overall style of the tracks. It does have a very “soundtrack” sort of feel reminding me a lot of “Conan” and “Excalibur” from back in the day…..a very visual experience. While I like the album, one issue I had was with track lengths as I think a few shorter tracks mixed in would have made for a better impact of the longer tracks. If that is the “worst” thing I can think of and I generally like longer tracks, then you know this is full of epic raging metal. The overall sound is decent but a little subdued….I think the guitar could have been a little brighter/sharper and the drums do have an artificial sound to them but not too horrific. Guess what? This album still made my top 10 list of debuts for 2019, displacing some decent ones in the process so definitely worth checking out.