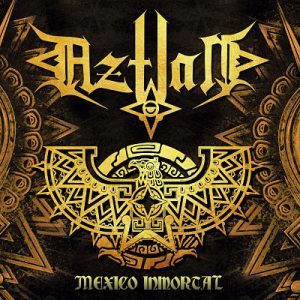 Aztlan had been founded in 2018 in Mexico City and is presenting us with “Mexico Inmortal” their debut album. The seven musicians are mixing Thrash/Melodic Death/Heavy Metal with ancestral Folk instruments and Mexican Folklore. Already the kind of intro track “La Revolution” is hitting in with full force preparing the ground for a very strong release and already got my full attention and interest. The second song “Son de Muerte” starts with a brilliant Mexican folklore melody played by traditional Mexican folk instruments in order to blast off into growls and very hard played Thrash/Death Metal. The mixture between the folk elements combined with this very harsh metal sound will thrill Death/Thrash Metal fans and Folk Metal fans in the same way. The following track “Kukulkan” is again showing how Aztlan understands to implement the Mexican folklore into their compositions, always finding as well slower parts to give the traditional parts more space to develop. In general it is to say that Aztlan takes their required time for each song to finalize all the spectrum of the band. Most of the tracks have a playing time of more then 7 minutes and in my point of view they also need it, as the styles in the songs are changing a lot of times. You have this aggressive harsh Death/Thrash Metal parts, slower Heavy Metal parts and always the Folklore goes along with it. With the track “Madre Tierra” Aztlan is showing us the first time another side of the band. The first 7 minutes of this nearly 11:43 monster track is much slower and more harmonized till it hits off again to the typically metal style of Aztlan. One of the hardest tracks of this release is “Guerra Azteca”, the name of the track says everything. Prepare for a full load of Death Metal / Thrash Metal, the folk elements do not play such a big role in this composition. The title track “Mexico Inmortal” takes his time with over 17 minutes and is definitely my personal favorite track of this release. Starting of with Mexican / Aztec harmonies with all possible pre-spanish instruments involved, it nearly makes you forget at the beginning that you are listening to one of the hardest bands I know out of Mexico. Slowly and steady the songs begins to implement the metal parts ending up in guitar solos and a very soft ending. My Spanish is of course very limited, so I can not charge the lyrics, but of course it is clear that this album is a Homage to the Mexican and Aztec history and myths. With this debut of Aztlan, they do not need to hide from other great Folk Metal bands and are an enrichment for the Metal Scene in general. As usual I would like to give my congrats to Aztlan for this great debut and I am sure that they will make their way.