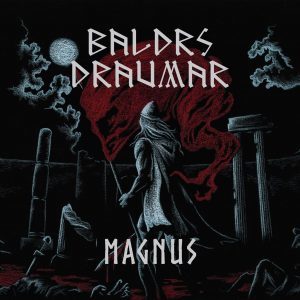 While I think most of us here at the site may have already picked our album of the year, I was holding out for the latest from Frisland’s favorite sons in Baldrs Draumar before deciding. Boy, am I glad I did as I have now just decided on my album of the year, displacing the latest Borknagar album in the process. “Magnus”, their 4th independently released full length will see the light of day on November 23rd. The album features 9 tracks at just over 51 minutes and sees them back into their electric era after their absolutely awe-inspiring acoustic album “Fan Fryslâns Ferline” from 2017. So, first off, after the acoustic phase what should we expect from them? You are definitely going to be thrown into a lot of new sounds from the band in terms of song styles. As a matter of fact, at times I would say you would not immediately know this is them. Uh oh, is this a bad thing? Not at all….there is actually a blending of “old” and “new” in the album with tracks very reminiscent of all eras of BD, even going back to their original demo from 2009 “Til Horisonten”. While they have never been necessarily the folkiest band around, the folk influence takes a back seat for the most part to a much more progressive (not stifling so) and overall heavier/verging on black metal at times direction. Don’t worry there is still plenty of accordion and acoustic guitar (probably what they may be most known for….at least what I think of first) and some other folk touches (violin comes to mind). This is another concept album from them (as was 2015’s “Algillisoan”) and is based around Frisian legend Magnus Forteman and his endeavors….definitely something you want to read about. There is not an overwhelming feel that this is a concept album but I’m sure when you purchase or see the accompanying graphic novel by Skelte Siweris Braaksma it will certainly drive it home. There is absolutely no filler on this at all, starting with the face smashing “Friso” (yes, no lame intro needed) to the epic scorching album closer “Eala Frya Fresena”. By the time this review comes out 3 tracks will have been released (“Toh Alden Fahne”, “Frij” and “Upstallesbâm”) and I think these tracks really do show the intensity, direction and most of all, the confidence and integrity of the album. Bone breaking riffs, perfectly placed vocals of primary clean, heavy and choral variety (a lot of really cool choral stuff), driving and tasteful rhythm choices, acoustic instrumentation….I can’t find a single negative. There are a lot of up-tempo tracks on here as well which never sound sloppy or out of control but methodical and well planned. The lyrics are in Frisian, which I still feel is the best choice they have made since switching back after “Forfedres Fortellinger” which was in English. For those of you concerned about the “new” sound do not fret….there is enough of the more familiar mixed in throughout while they branch into some new territory. The overall sound is gnashing and smooth with a subtle bite to the overall sound, both being heavy and inviting at the same time.  Let the naysayers be damned for this is Baldrs Draumar at their finest. Lest you think we are rooting for the home team here at the site, I live in the US and know this is the real deal. For those waiting for the next slew of metal albums from whoever in Scandinavia, eastern Europe or the US for that matter, you need only travel to Dokkum on the North Sea to find the best folk metal album of 2019.