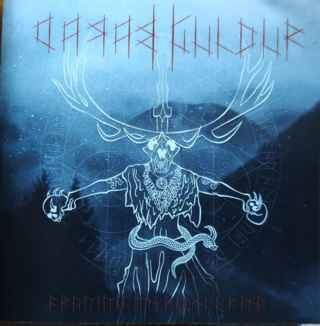 ‘Frammenti di oscurità ‘ (or fragment of darkness) is the first release of this Italian band, which with 11 songs brings us its style with a classic European folk-metal sound in both melodies and guitar riffs. The male and female voices sing in Italian, with a great performance, and being 9band members generates a very well complemented sound with nice musical performances. I sense that this sound should be almost hypnotizing when listening to them live. For me, it would be wonderful to be able to hear live the melody of ‘Asfaladugu’ and let myself be carried away by its cadence, which easily stays in your ears, and also headbanging to the rhythm of ‘Frammento Di Oscurità’.
The band takes the name of a tower from the stories of the lord of the rings and means “Tower of Dark Sorcery”. This is a clue to the theme of the lyrics we find in their songs: fantasy, ancient legends, and north-Italian folklore.
I really liked the atmosphere generated by “Nella notte più nera” (In the darkest night). It’s a very melodic and has a very well built style that perfectly combines vocals, percussion, and melodies.
“La Gratacòrnia” may be a confusing song for the audience, as it is only choirs performed by the Alpine Choir “Le Due Valli”. They (the choir) have performed alongside Folkstone -band also originally from Bergamo Itália- but serves as a resting point before moving on to “Per Chi Éla La Nòcc”, which brings a stronger rhythm with more throbbing drums.
We currently can find their songs in audio on their YouTube channel, along with other songs such as covers and songs of traditional music -highly recommended- that can help us to learn a little more about the influences of the band. We hope in the future to have an official video and live performances soon.
In summary, this album is a very interesting beginning for the band. I think it could have more differentiating aspects of other bands in the music scene. This since the number of members has great potential to generate sounds that stand out worldwide. We do not deny the quality and talent of its members, and this being this their first album, we believe that step by step the band will grow musically to stand out.
As an extra fact, among its members, we find Mac on bass, who is a former member of Furor Gallico.
There is nothing left from Folk-Metal.nl but to wish them a great career and success for everything that comes from now on.