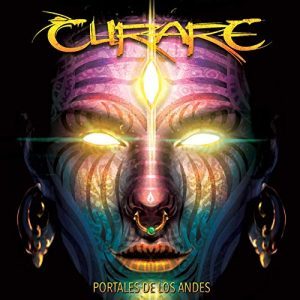 Founded already in 2001 in Quito (Ecuador) Curare is presenting us with “Portales de Los Andes” their five album in the band history.
Curare defines their music as Folk Metal Andino or Longo Metal and their influences mention on the facebook site sound like a “who is who” of the Metal Scene beginning from Black Sabbath over Metallica, Sepultura, Nirvana, Rage against the Machine up to Sodom and many many more. On the 13.07.2019 Curare presented their new release live at the Teatro Universitario U. Central and had a lot of further shows this year in Ecuador.
What I can say from the beginning is that Curare is one of the most “underrated” bands I know, simply due the fact what the 4 musicians present us on this new longplayer should received much more attention in the Metal Scene, not talking “Folk Metal” only.
Already the first song “Tiahuanaco” is starting with a great atmosphere with a typical incan flute melody combining fantastic guitar riffs and vocals. The mix between metal, a great guitar solo and more quiet traditional folk elements make this song to one of my favorites of this release. The music itself is as wide as the influences Curare is mentioning. For example the beginning of the song “Caranqui-Cochasqui” reminds me on the old times of the cross-over area in the 90’s (Rage against the Machine), while it continues with mixing all kind of styles and developing nearly into Thrash Metal. On the next track “Viaje Astral” Curare takes us on a more quiet journey and it never becomes boring. The only thing that all tracks have in common is the “Andino” or “Longo” folk elements. After the slower episode of the album “Viaje Astral” and “Machali” we receive on “Conciencia Planetaria Unida” again the full folk metal load directly into our ears. Again the style of music is changing, becoming harder and harsher. The harmonies and melodies continue to change from song to song and Curare has the talent to perform all styles on a very high level. The band definately knows what it is doing. With the last song “Puntiatzil” we reached the end of a 50 minutes strong record and it is by far to most harmonic song on the record. Typically Curare again something total different, as all other tracks on the release. As artists they also like, Curare added on their facebook site artists like Van Gogh, Bach, Mozart, Vivaldi or Chaplin, so basically all masterminds and Curare is on the track of the same when it comes into the genre “Folk Metal/Rock” or “Andino” or “Longo Metal”, whatever they play.
In the meanwhile I gave up in trying to put Curare in any kind of genre. “Curare” is just “Curare” and “Curare” is great !