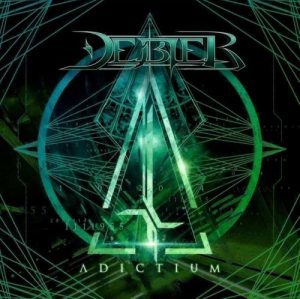 Débler released a new album, their third one already, called ‘Adictium’. What music can you expect, the answer is a bit the same as when you ask us why the the previous albums weren’t reviewed by Folk-metal.nl. The Spanish metallers don’t make straight forward Folk-metal. But their Melodic Metal has lots of influences from power-, symphonic- and folk-metal. Nobody threw their music on our path earlier. Their promoter did send us this album and despite the fact it isn’t all folk-metal what you hear, it has enough folk-metal elements to feature the band on this website.
The music immediately reminds you of bands like Mago de Oz and Saurom, a typical Spanish sound, in my opinion. Lots of power- and Symphonic metal here, but the addition of violin is provides the folk-elements in quite a few songs, like in ‘A Esta Ronda Invito You’ for instance.
It’s clear the band has years of experience, the albums sounds very mature and the songs are very varied en skillfully written. The production is very good, it’s obvious the band knows what they’re doing.

A very nice album. When you’re into bands like Mago de Oz, this is surely something for you!