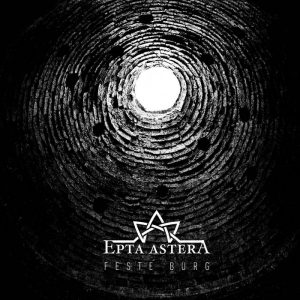 Since I know folk metal I already have encountered a lot of different styles and themes in our beloved subgenre. With Epta Astera based in Rochester, New York a new theme reached my horizon. Have you ever heard about Gregorian Folk Metal ? No ? Me neither! But the same is presenting us Epta Astera on their meanwhile third release called “Feste Burg”. Basically this new release is an concept album about the reformation in the christian church, telling us the story of Martin Luther. On bandcamp we can read “On October 31, 1517, a pamphlet was nailed to the door of a church in a small German town, setting in motion a violent upheaval that would augur both staggering glories and fatal decadence over the coming centuries / FESTE BURG tells this story” The first track “Salve Regina” is starting off very quiet with some background ambient and some nice gregorian chanting, getting us into the mood for this very special record. The next track “Noche Oscura” is already combining the chants with some black metal growls and traditional folk instruments. It is followed by an very harmonic guitar solo while in the background we can hear male vocals speaking in german a monologue. The whole song takes over 9 minutes and is very atmospheric and very well arranged. The spirit of the music continues in “Metanoia”, combining chants and choirs with folk elements and beautiful harmonies. On “Aletheia” the sound becomes a little bit darker and the metal elements are more present including black metal growls, but also includes very nice parts where the folk instruments are dominating. The following song “Exsurge Domine” is opening with a nice guitar solo in order to end up again in a mix of drone and chanting. On “Ich kann nicht anders” we hear only Gregorian Chanting in German language, you nearly feel like listening to this chant in a church. Also you can hear the famous sentence of Martin Luther “Daher kann und will ich nichts widerrufen” which is highlighted by Epta Astera on bandcamp, but as well on the physical release (which is limited to 500 copies). The track “Die Mordischen und Reubischen Ritten der Bawren” is now again combining black metal growls with chants and the atmosphere is getting harsher and darker. “Augsburg” is the final song of this release and has a playing time of around 10 minutes. This track has by far the strongest black metal influence and growls vary with the chants. Considering that Epta Astera is a one man show, which is getting the support from the one or other guest musician on the record, it is really very well produced and arranged. I am sure that this release will not fit the taste of every Folk Metal fan. It is simply something totally new and unique and you must be open to the very special kind of sound. Personally I think that Epta Astera made a very good job in telling us the story of the reformation as part of the history in his own way: Gregorian Folk Metal.