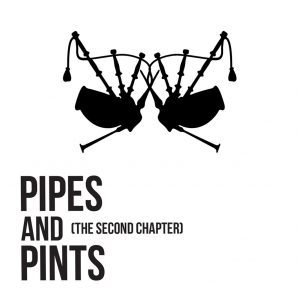 Pipes and Pints hail from Prague and they are an interesting punk infused band with influences that range from Celtic to country and rock, The music is lifted by Highland pipes and great lyrics that shine through. The album requires a few listens to settle in, but it is worth the time. The workman like tracks seem simple at first but given time they will stick in your head and as the pipes really talk to you the music takes on greater interest. The instruments shine and the singer has a very good voice. On the more punk tracks he sounds very much like Billy Idol and on the more traditional and country tracks he takes on a more relaxed tone. When the pipes take center stage the songs really pop and I think this is a band that would be great to see live. The album opens with,” A Million Times More”, a great song that showcases the bagpipes and that Billy Idol style punk sound. More Rebel punk follows with,” Raise Our Flag’, and the mid tempo, “Shadow on You Wall”. Rebel in my Veins and “Diamonds and Dreams” follow the same pattern and then The band throws a curve ball with the excellent country flavored Dark into the Night. Its an album highlight for me. The rest of the album is more quality punk rock except for the final track,”Wait for You” Its a very traditional sounding song with a bit of a van Morrison vibe and its the best track of the album for me. That one will be on repeat in my playlist for a long time. The Second Chapter is a quick listen as the tracks are fairly short (some are too short) but it is a nice slice of Celtic Punk music. The band has two other releases, Until We Die and Found and Lost. Both albums can be found on Spotify and they feature a more traditional punk sound and a different singer, I like the direction the band has taken with their latest release and I will be looking forward to their future.