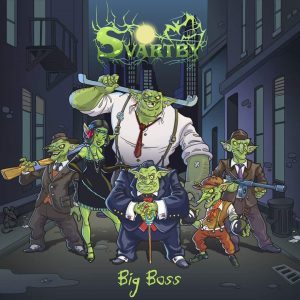 Grappling with mixed feelings, I was completely uncertain how to review this album, frugally listening to it maybe once every 2 weeks. Certainly, the premise of reviewing a release amplifies the potential criticisms compared to recreational listening.  Nonetheless, let’s get right into Svartby’s 5th concept album. An intro reminiscent of records passed opens as expected already implementing a hint of worn off novelty. This is succeeded by the full-length tracks and an outro aptly named Hangover, echoing the implied 1920’s prohibition era swing concept. An awesome cover depicts goblins clad in appropriate attire wielding weaponry and with 7 tracks but only 22 minutes of material, Big Boss plays a bit more like an EP.

Breaking down individual songs, Rails and Guns is a solid start with a Rockabilly flair, tense piano licks, and ever familiar horns. Next up, Goblin Malt an upbeat party-party track showcases jazzy keys and walking bass lines. Gnofkes wailing false chords fitting yet undiscernible at times. To his credit, the years of trained versatility in lower to higher pitched false chords mixed with high and low fry is evident and commendable throughout Big Boss but especially in Deadly Tango, a slower tempo track fitting for foxtrotting. Tommy Guns as the rascal of the pack, brings riffing with thrash touches and stylistic xylophone atmospheres but even as the organ shines, the melody falls a little flat.  Big Boss follows in a similar fashion.

Shortly after the album was released, founder, creator and composer Giftsvamp announced his departure from the band after 15 years, effectively closing the project. Such a turn of events reveals volumes about the intentions behind Big Boss and thus arrives back to my premise. I wanted to be harsh on this album but understanding the circumstances don’t quite allow me to. Ultimately, Big Boss doesn’t live up to Elemental Tales, Riv, Hugg Och Bit or Swamp My Neighbor on several levels but perhaps, that wasn’t the aspiration. Earlier times for the band brought unforgettable melodies and wonder into the stale swampy genre whereas this newest release I’ve interpreted as a metaphorical end to the concept that is Svartby which just makes sad rather than critical. Fin.