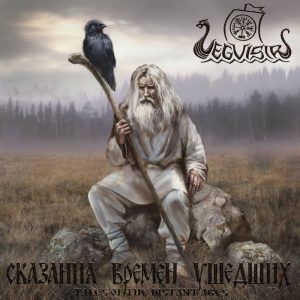 If you want your folk/Viking metal fix, Bandcamp is where it is at. Case in point, the semi-debut album from Russia’s Vegvisir has been on it since mid-October and we are getting to review it. When I say semi-debut, they have actually been in existence since 2006 under a different name (Тысячелистник) and their name was recently changed to Vegvisir. As far as full length album goes, yes this could be considered their official debut even though their initial demo from 2008 had 8 tracks on it. Entitled “Сказания Времён Ушедших” (“Tales Of The Distant Ages”), the album has a total of 9 tracks totaling about 32 minutes. Some tracks have been released previous to this album from both eras in their history so this could be almost a reintroduction to them for you past fans and new ones. I’m trying to think of where to start with this as there are a lot of issues here. Usually I talk about the sound of an album last in my reviews, but I will start there this time as it is probably what is bugging me the most right now. The sound is flat and the attention (or lack thereof) specifically in the keyboard sound is glaringly amateurish. This has the sound of a one person/homemade project and not a full 6 piece band… and I thought of my recent review of Burden Of Ymir and then I thought that had good sound so my theory is out the window. If you have been at it for 10+ years I would like to think you would have homed in on a recording sound that works. On to the next thing which is the overwhelming number of instrumentals (4) on a 9-track album. I found this to be complete filler, especially when 3 of them close the album consecutively, this really makes no sense in the overall flow of an album (The other instrumental track is the obligatory intro). As far as the regular tracks go, they are decent in the 3-6 plus minute range and have a Viking/death feel about them but lack the bite of a more solid sound to give them more impact. I think the name change was the right thing for Vegvisir to do and I would like to think this might springboard them into some better decisions down the road. For the time being, “Tales…” doesn’t feel like an album that has a finished feel to it from a music and sound perspective