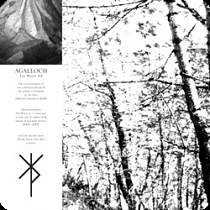 I can assume that many of you have not forgotten about the incredible era of music that Agalloch was responsible for. Quite possibly the best folk metal-based act from the U.S., their catalog is a treasure trove of amazing music, in both heavy and acoustic varieties. November 29th will see 2 re-issues of  EP’s from them in 2004’s “The Grey” and 2008’s “The White” from Eisenwald. At my last count Agalloch had a total of 5 full length albums with countless singles, EP’s and compilation contributions. With all the possibilities, I must take some umbrage at these being the re-issues chosen for several reasons. First off, I would call both instrumental releases, more or less. Yes, there is some “vocals” mostly of the spoken word variety and very subtle throughout most of the tracks. I think what made Agalloch incredibly hypnotic was the combination of their heavy/electric and acoustic parts in each track or at least the anticipation of it happening. Knowing that these are mostly all acoustic and basically instrumental makes it somewhat anti-climactic. Why not pair one of the EP’s with one of the albums as a re-issue? Just a thought. Now look I am as big an Agalloch fan as there is and hearing these as standalone releases somewhat diminishes their impact. In the context of being mixed in with their other releases (both came out around full lengths “The Mantle” (2002) and “Ashes Against The Grain” (2006)) they make sense as bridging or connecting musical releases folded into the others. So why would you purchase these? Here are some positives…..both include a bonus track. “The Grey” features “Shadowdub (How Beautiful Is A Funeral)” while “The White” includes “Where Shade Once Was”. They are also being issued as CD’s as well as various versions on LP’s. Lastly, and possibly the biggest reason to purchase is the remastering by Gus Elg of Skyonion from Portland, Oregon. Known for more musical styles outside of metal for the most part, Skyonion has done the releases justice. Sonically they have a more contemporary and tangible feel than the originals and do have a quality to make them sound brand new once again. Since I already own both releases, for me the re-issues were nothing extraordinary other than the extra tracks and sound quality. For fans of Agalloch who missed out on the first time with both of these, they will fit right into your collection, but I would certainly pair them up with a full length to really appreciate what these albums represent in their catalog.