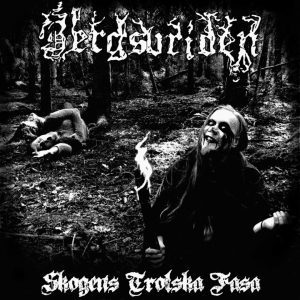 There is always one album every year that drops in too late for my end of the year lists that should be on it. Thanks Bergsvriden…. this year it is your turn and I will once again probably break the rules and put you on my top list for 2020. Dropping in (or rising up) I guess from the swamp is their 3rd full length “Skogens Trolska Fasa” (I am liking “Troll Horror Forest” as a translation) released on Bandcamp. I have made no secret to the fact I like the most wretched of folk metal (after all Bergatgen I considered my 2019 debut of the year) and Bergsvriden are still the uncrowned kings. The new album has 9 tracks at over 33 minutes, and it is as dirty, creepy and slimy as the two previous albums “I Vitterhetens Becksvarta Gömmen” and “Hellsemyr”. I think things unknown are pretty creepy and Bergsvriden have kept a low profile over the years, adding to the mystery…..it would be easy to know who they are (basically) but to suspend that knowledge to keep the fear alive is a better option to me. The tracks are in the 2-6-minute range and are catchy as they are oozing with goodness. For comparison’s sake, Finntroll, classic Svartby, Goblin Hovel and Rogatiy Kolokol I think are 4 good ones, but they are not as shadowy and definitely not as filled with dread. The big differentiating factor I feel is the mood you feel and for a folk metal band not really what you have as a goal……to give the listener a real sense of fear while listening. If I would say this is a soundtrack for being lost in the forest you might be getting some idea of what this is all about. They have a standard guitar, bass and drum formation with vocals that are either shrieky, semi-spoken or whispered with reverb aplenty and mingled in with the maniacal folk instrumentation (I think accordion, flute, mouth harp and some piano) really add to the drama. Now I may have my own interpretation and as scary as it potentially sounds, it is still a super fun enjoyable listen. I am sure the case could be made this is black metal, but I think the whole project is done in a sort of not so serious way on some level. The longer tracks for me are the highlights (“MARAdrömmen”, “Gammelpackan PEST” and “Uti Vredesmod”) where the tracks build to crescendo, but all of the tracks are stellar. The production (or lack thereof) also makes this work….. yes, the detail is there but it has an old 4 track recorder sort of sound to it. Along with the new forthcoming album from XIV Dark Centuries, Bergsvriden is getting a spot for now on the top releases.