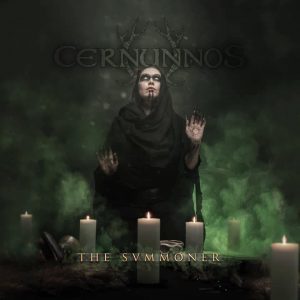 With the exception of a digital single, The Svmmoner is the first new material Cernunnos has released in three years. Taking only a cursory glance at 2018’s single “Survivors” and comparing it to a song like “The Birth of Galatia” shows that the songs portraying war in Cernunnos’s material has gone from upbeat and gung-ho to anguished and even a bit traumatic. It could definitely be a matter of edgy realism except now when one listens to the Cernunnos EP everything has those dark undertones.
Right of the bat one is treated to the absolutely creepy intro “Cycles”. Why a 14 minute EP needs an intro is unclear, but because the intro establishes some ambient motifs that will be repeated and blends so well into the next song it is not redundant in the least. The intro consists of a drum being beat within a thick forest ambience. With the howling wolves, the cries of ravens, and some background sounds that have an uncanny resemblance to muted screams there is a generally eerie atmosphere which is repeated as a motif across songs.
“Torc” follows the intro and showcases the more aggressive sound Cernunnos took even last year with “Survivors”. Interestingly, while the guitars are chugging away with more or less the same pattern, the violin plays the leads. As a result the music has an unnerving dissonance in some sections. The growls alternating with clean vocals reinforces this effect. There is, however, a filter used for the vocals, prior to one of the breakdowns that, while not making things worse, is slightly overused in alternate rock, and fairly uncommon in Folk Metal (I’m sure Evanescence would have at least three of those hollow echoes per album). There is then a rapid transition into the eponymous song.
Unlike the other two regular tracks, “The Svmmoner” is very reminiscent of Cernunnos’s debut album with emphasis on the folk instruments, and being driven by both the flutes and violins. Because this song has more varied instrumental passages and comes closer to the previous album’s spontaneity, the eponymous track stands out. At the end there is once more the ambient forest motif but with a hurdy-gurdy slowly fading in until the next track begins full blast.
To close the album off, there is another high speed riff-beast called “The Arcane Below”. Here, the hurdy-gurdy plays a major part in the intro, and the somewhat repetitive riffs are very melodic. One flaw with this song is that, with the exception of the breakdown and folk instrument leads, most of this track is a variation upon the same sequence of riffs within itself. However, “The Arcane Below” makes up for some monotony with abrasion. In the end the forest ambience motif resurfaces, but this time with the same creepy animal sounds, showing perhaps that the cycle has gone full circle.
Some closing remarks: Firstly, while the transitions are really smooth and each song can indeed be played independently without sounding off, because there is no clear fade at the end of each song listening to them separately in a playlist may be a bit uncomfortable (the eerie hurdy-gurdy transition leading to nothing comes to mind). Secondly, fourteen minutes is awfully short even for an EP. However, with the cinematic feel and the debatably repetitive nature of some songs, Cernunnos have done what some bands can’t, not making the songs feel like riff after recycled riff. There is enough variation in instrumentation and switches in vocal style to keep everything sounding dynamic. For those people who still consider Folk Metal to be full of drunken cheer and magical flutes we now have another example of an album that is so black and chillingly eerie that one would hardly pin it down as the same band who put forth Leaves of Blood back in 2016.