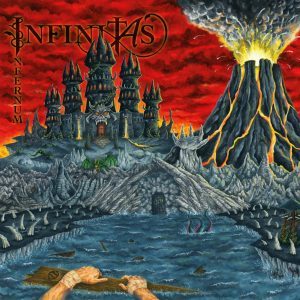 Switzerland’s Infinitas has been kicking around for 10 years now and a 2nd full length has just been released entitled “Infernum” in early December. This would be their 2nd full length following “Civitas Interitus” from 2017. Independently released, the album features 13 tracks totaling around 54 minutes with 2 tracks (“Avnas” and “Rahu”) being released prior to the album. So, you know a comparison to Eluveitie is inevitable if you are a folk metal band from Switzerland and I would say that they really do not really sound like them. If anyone from Switzerland is close, we could call Cellar Darling semi-close with some hints of other acts like American acts Sekengard and Siren’s Rain. My understanding is that this album is part of a much larger musical concept but I don’t really get a concept album vibe while listening to “Infernum” so time will tell if the future releases will help complete the narrative. You actually have to go back and listen to “Civitas….” to begin the story and follow along. Since I don’t have the CD’s I couldn’t really give you a specific idea of the concept, but I don’t think it takes away from the listening experience. I think for the most part I would want to call this borderline power metal but has more folk instrumentation than most acts (primarily violin) that straddle the two genres. It is also very riff heavy and technical so you progressive metal fans will get into this too. The biggest noticeable part of their sound is vocalist Andrea Böll who morphs into numerous vocal styles throughout….from shriek to death to clean to soaring and they all work. Comparing “Civitas….” to “Infernum” doesn’t really yield any major differences in terms of their sound but I would say in a short time they sound a little more mature and the sound quality is more refined on here. As most concept pieces go, there are some interlude pieces woven throughout to tie the various tracks together which could be perceived as filler, especially if you don’t know what/how they relate to the concept. However, I really think they are necessary from a listening perspective…..if you happen to skip the interludes and just listen to the tracks, it could become one dimensional.  I really enjoyed a number of the tracks…..”Avnas”, “Lilith” and “Rahu” are all strong stand alone tracks. Compared to other concept albums, I feel that it really isn’t in the same league…..however, this is a really good, solid album. I have had it on listening as background as I type away and I really feel that is a great way to enjoy it…..absorbing it in while not necessarily critiquing it. A valiant second effort and great album from Infinitas.