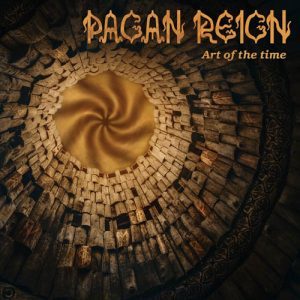 I have to admit I’ve been quite distracted of late, with the decade’s end and critical capacity of good music approaching, I’m a bit overwhelmed. Nonetheless, I managed to divert my attention for another installment of Long-term Underrated Bands and in today’s Russian Folk metal list alongside Fangorn, Leshak, and Izmoroz are Pagan Reign, especially highlighted by this most recent release. Now I don’t group these artists together stylistically, rather on lack of recognition, otherwise they aren’t a lot alike.

Released at the beginning of this month, Art of Time is Pagan Reign’s seventh full-length album since 2002, quoted as “dedicated to the art of creation and the accumulation of knowledge based on the age-old cultural archetypes of the harsh and mighty north”. Pagan, indeed. Not only the band’s name suggests their origins and motivations, but the mostly English, some Russian lyrical motifs also focus on Gods and theories of how a lifecycle intertwines with time and creativity. Besides this, much of the instrumental work is with traditional pieces like Mandolin, 4-String Dorma, winged harp, Zhaleyka, Tver’s Horn, Sopel, Reedpipes and Flute to name a few. With both wind and string arrangements for each of the 7 tracks, the sound is robust and complete, ensembled well with the standard instruments, mixed harsh and low clean hymns sprinkled in. Orey’s impressive range swings from a deep death growl to a high blackened fry adding noticeable brutality and in many cases melding towards black metal more than perhaps expected. I believe the balalaika like strumming also contributes to this. Guitar work is noticeably impressive from melodic riffing, beautifully strummed quieter passages to killer solos.

The first few tracks are upbeat and faster than the second half of the album, for me this separates it into two pieces rather than one varied throughout. Despite this interesting track arrangement, each song is well thought out and organized, avoiding dull or repetitive moments. Although not a very long album it is one of 2 released in a single year as the band jumps back swinging after a lengthy hiatus. Pagan Reign achieve their salvation with two great albums which certainly deserves more attention.