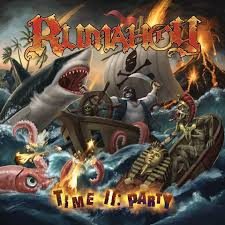 Rumahoy’s new album is evidence of the essence of pirate folk metal. They come with their second full length to prove that they are true pirates in more than one way.
A very nice album to listen to, very original compositions and true to their style, catchy chorus, and melodies that will make you to feel like a member of the crew. The lyrics brought by the voice style of the Captain Yarrface are really fun and towering. He is accompanied in vocals with a group that truly feels like the crew at his command; maybe the most purists of music may find variations and impressions in the chorus, however, it’s a well-handled style that is forgotten by being carried away by the joy that their songs bring.
This disc is remarkable from its very cover. With the first song ‘1000 years of dust‘, we start on this pirate journey with strength and marking the style that we will see in most of the tracks. Powerful and very good riffs but in some moments you can lose them a bit between choirs and other instruments. The duration of the album is adequate, and the songs do neither become boring nor musically repetitive. Great production work I must say.
I couldn’t stop enjoying ‘Stolen treasure’. A song that must be the song with the most appropriate name in the world. And it is that folk-metal fans and mainly pirate-metal fans will immediately identify the tune of Alestorm’s ‘Drink’, but seeing the lyrics you may not stop laughing -as happened to me. A total success and a statement that they are true pirates.
And if Alestorm has a Pizza party, then Rumahoy has an energetic ‘Poop deck party’ with the collaboration of the “little boy” Christopher Bowes (Alestorm). The song despite from being the story of a pirate “dirty party”, is really very joyful and enjoyable, although it goes a bit out of the genre for its feel of electronic music, it does not clash with other songs and keeps us in the same boat.
By the 5th song, it feels strange to hear from Harambe again, the gorilla who appeared in news’ headlines in 2016 for the incident at a zoo with a child, but for those who remember him, it will be a pleasure to know that if he’s alive he has an open invitation to be part of the crew of Rumahoy, and we will continue to remember him since this song has a rhythm to be heard more than once.
‘The beer from my town is better than yours’ was one of my favorite songs, along with ‘Cowboys of the sea’ and ‘The Legend of Captain Yarrface’, but in general, what I like most is the attitude and metrics of the main voice along with the cadence of the rhythms that give that pirate flavor that both highlights in Rumahoy and Alestorm.

Time II: Party is a mandatory purchase if you like the pirate sub-genre… and those who illegally download it deserves walking the plank.