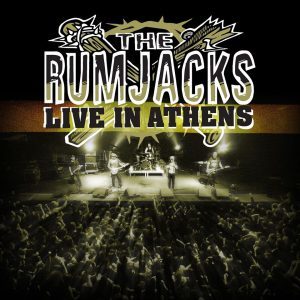 Its no secret that I have a warm place in my heart for the Rumjacks. They are in the elite ranks of Celtic punk bands and I would love to see them live. Unfortunately I haven’t had the chance yet but I’m hopeful. The band is high energy and they bring a large catalog of songs from Punk to traditional and all the flavors in between. Live in Athens finds the band in fine form. Spanning twenty one tracks the set list is deep featuring songs from their entire career. The band sounds great with all the instruments and the vocals coming through the mix clearly. There are a few feedback moments and the live sound is slightly thin compared to studio recordings. The presentation is suitably rowdy, from tin whistle to electric guitars its all there with any mistakes completely intact. The band celebrated ten years together as a band in 2018 and this is the first live album they have released. Highlights of the performance are hard to pick but “Cold London Rain”, “The Reaper and Tam McCorty”, The blistering “Jolly Executioner”and a wonderful rendition of “The Black Matilda” rise above the fray. I’m not really a fan of Live albums overall but this is a nicely recorded show and it makes use of the bands deep catalog and its ability to put on a great show. The crowd in Athens was energetic as well seeming to know all the songs and adding to the overall atmosphere.  I think the band did a great job and this is a fine live album. For those that like live albums it provides a nice mix of old and new songs from Punk-Ska to more traditional sounding songs and a look at one of the great Celtic Punk bands at the height of their career.