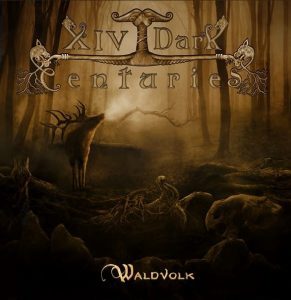 Let’s not get too excited, but can we already start talking about best albums of 2020? Even if you’re not ready I am with the pending release from Germany’s XIV Dark Centuries. We got this one way early…..“Waldvolk” (I am going to say “Forest Folk”) will not be out until February 28th on Einheit. Featuring 11 tracks totaling 44 minutes or so, “Waldvolk” is their first new music in 9 years…..I can’t believe “Gizit Dar Faida” came out in 2011. Well, they are making up for lost time with “Waldvolk” which shows that 9 years of hibernation might be what every band needs to do. I would say after going back into their catalog, they are definitely a band that had some issues with consistency and productivity. Formed in 1998, they have only put out 3 full lengths, an EP and some demos up to this point with some being better than others. Even “Gizit…..” after listening to it again suffered from a less than powerful production. “Waldvolk” delivers on numerous levels and smashes all of their previous releases. It was a small matter of getting reacquainted with them and giving some relevant comparative acts…..I would say some Heidevolk, the highly underrated Voloh (where is some new tunes from them?), Equilibrium and the always epic Æther Realm work for me especially on this new album. The tracks are full of energy and with an average track length of 4 minutes per you know they get it done quickly. I wouldn’t say they necessarily go 1000 mph the whole time…tracks like “Svava” manage to actually have interlude parts in between the more up-tempo sections. There is a nice balance of fast and mid-tempo tracks here which makes for a great listening experience with both styles of track working well. When they try to go blast beat, I think it sounds a little uncomfortable for them (parts of longest track “Sunna” and “Firratan” come to mind) but those moments are few and far between. The riffs are super memorable and well crafted, still having a pagan vibe but being more accessible and tastier. Lyrics are in German and there are tons of backing choral vocals which I may have just realized may be one of my favorite parts of some recent and favorite albums from 2019. There is a little acoustic instrumentation sprinkled throughout (mostly acoustic guitar and some flute/whistle) and keys really drive the symphonic/folk instrumentation parts home. While I don’t think there is anything that is super unique on “Waldvolk”, everything on here has a familiarity that makes you want to listen over and over. They didn’t overdo it and kept it relatively simple but strongly crafted. The beginning and ending instrumental pieces (“Heimwaerts” and “Nott”) could have been omitted but they don’t annoy me in the context of the rest of this killer album. The sound is heavy and detailed, far surpassing their previous works giving it another massive thing going for it. Sorry to say you are going to be waiting another 2 plus months for this one, but it will be well worth the wait…….and a forerunner for album of the year candidate for 2020.