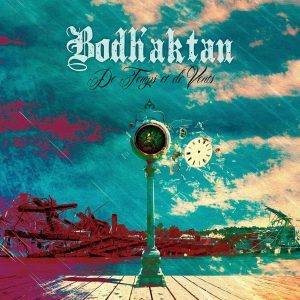 Some of my favorite bands come out of the Great white north of Canada. Rush, Triumph, Neil Young, along with Some great traditional bands like Great Big Sea and The Dreadnoughts however I confess that until recently I had not heard of Bodhaktan. I am very glad that I had the chance to get to know them because this band is tight and on the brink of great things. They are based in Quebec and as such this album is entirely in French. The band does have other albums in English but I’m glad they stuck with their native tongue for this release because it just hits the sweet spot in every way. Everything about De temp et de vents is turned up to 10. The band is incredible, the harmonies are spot on and the mix is so good that I felt goosebumps in many places. Everything sounds perfect and at times you can hear the whistles riding on top of the mix like surfboards on a wave. When the electric guitars break in they are powerful and melodic and when things slow down the voices glow in your ears. I can’t say enough good things about the sound of this album, it is exceptional. There is really not another band that I can say sounds exactly like Bodhaktan they have a traditional sound but also an edge and an energy that is quite special. This disc runs about 39 minutes and you may want to just hit repeat at the end. The entire thing is wonderful but highlights for me include,”Capitaine Deux”, “L’orage” and the shiver inducing,”Le jardinier du couvent”.  De Temps et de vents is a strong offering throughout, it is surprisingly folky but also modern and oh so catchy. I hope I have the chance to see them live soon I’m sure they are incredible.