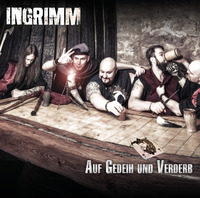 The waiting time has an end and after 5 years since their EP Release “Ungeständig” Ingrimm was finally releasing with some delay their 5th Full Length release “Auf Gedeih und Verderb” on the 10.01.2020. Personally I was discovering this great band from Regensburg quite late in 2014, but was immediatley fascinated by their own style and interpration of Medieval Rock or better to say Medieval Metal. Ingrimm is definatley one of the hardest bands I know in this specific genre and at least in Austria they have a fan base in the Medieval Rock Scene, but as well in the Folk Metal / Metal Scene. I guess that they played in 2018 at the Wacken Open Air and as well on the Wave-Gothic Treffen shows the variaty of their fan base. In 2019 Ingrimm toured together with Krayenzeit in Germany and rocked places like the Backstage in Munich, the Hellraizer in Leipzig or the Logo in Hamburg.Coming to the new album itself I must say that Ingrimm did a perfect job and the 5 years waiting were worth it. Ingrimm is presenting us with “Auf Gedeih und Verderb” in my opinion their strongest and most mature release so far. You will find on this record everything a Medieval/Folk Metal fan desires. I will not dig too much into the lyrics as they are in German and we are an international platform, so the only thing I would like to say is that the record is treating a lot of serious and social topics, but is also showing a sense of humor on some tracks. The music itself is mostly combining hard metal riffs with folk instruments as the Hurdy Gurdy, Bagpipe or Violin. Ingrimm is following its own way and you will find on this release harsh Power and even Thrash Metal parts combined with the typical Medieval influence which we are used from this formation. The vocals also variate from clean parts to some growling elements. Ingrimm is not following any given directions from any music scene, but is once again proofing with this new release that they follow their own way. Even that the year is quite young for me this release is already a highlight in 2020 and I know that the year is very young, but the record would have the potential for the album of the year already. Big concrats to Ingrimm and thanks for this great album!