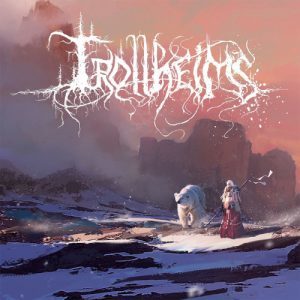 Quebec, Canada has a solid history of folk metal from Trollwar, Talamyus, Nordheim, Distoriam, Valfreya and many more. Time to add a “new” band to that list with the self-titled debut by Trollheims. Yes, it is a debut but as far as being a “new” band that is not really the case here since they have been in existence since around 2010. The independent album has 11 tracks at around 45 minutes with all new tracks presumably with one exception (“Precipitating The Battle”) making it on from their original 2012 demo. Many of the bands I listed have distinctive styles/genre attachments and are all unique from each other and Trollheims is no different in that regard. They have a hard to define style which I think I would say verges on melodic death with some symphonic touches so maybe somewhere between Æther Realm, Ensiferum, Borknagar, Equilibrium and Wilderun but less progressive than these acts while still remaining technical. They fill up a lot of space with guitars galore augmented by keys and bring an array of riffage, tempos and song styles. After the obligatory intro “The Fall Of The Ancient” they blast right into “Dust” and the remaining tracks including a short instrumental (“Swing Thy Axe”) with an average length of 3-5 minutes per track. One thought I had while listening is how I can almost hear that this is a collection of tracks written over an extended period of time and not in a more confined one. The tracks are all solid but do sound disconnected from each other with distinct influences in certain ones. “Valley Of The Dwarves” and “Bloodbath” really took me to Finland with a mix of Finntroll and Ensiferum…..those were the obvious ones to me with others sprinkled throughout. Tracks like “Rainmaker”, “Northern Rage” and album closer “The Last Giant” I think are the most promising for future success with well thought out arrangements, strong riffs and instrumentation and they just so happen to be the longest tracks here…..hopefully these are the most recent additions in their repertoire. This is an album that as you listen the material gets stronger so I would hang in there after the first few tracks to get to the more interesting ones. The overall sound is safe with space given to what is needed from folk instrumentation (mixed bag of things from whistle to accordion) to vocals and regular instrumentation. While I could certainly get on their case for taking this long to get it together, Trollheims has some good stuff going for them and I can see some strong possibilities on new material going forward. Decent overall release.