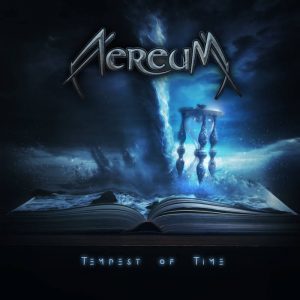 I would hate to make a trend out of heaping criticism on the albums I review, however sometimes one just has to be blunt. While many debut albums can be improved in some regard, Tempest of Time is a case study in by-the-numbers songwriting and undeveloped potential. Folk Metal has gathered its own fair share of cliched concepts over the years. Like certain tenets of the Thrash revival there are some bands that, (at their very worst) can come across as clones of more famous bands. However, none of that ruins the Folk Metal genre, nor the aforementioned bands. So, hopefully, a little critique would not damage the chances of Aereum going ahead and finding a foothold with future releases.
Firstly, some praise for originality. While the music itself varies somewhat in quality, Aereum have brought taken some of their lyrical subject-matter into Cyberpunk territory. While one is treated to the standard themes of Troll wenches (“Wolga the Troll”), pirates (“Whitejack” and “Just Pirates”), some tracks go into fairly novel science-fiction territory. “Modular Cowboy” and “Digital Warfare” both offer some ideas that aren’t used often in Folk Metal. While the actual lyrics skip over potential for social commentary, and instead, use the old feel-good Europower approach, the more bland, catchy, and uplifting lyrics, are more consistent with their self-styled Heroic Folk Metal. Both “The Eye of Bastet” and the intro to “Modular Cowboy” are beautifully done, with thematic segments, that while in the case of the latter are unusual for Folk Metal, fit the songs well. While discussing what was done effectively, let me touch upon one quick aspect of their music that could easily be remedied in future releases.
On Tempest of Time the folk instrumentation is done with accordion not. The sound of the accordion is not perfect on this album, better recording/production would have greatly improved the sound of the album. On almost every track there are sections where the accordion sound like a Hammond Organ, with traces of other instrumentation. Perhaps remastering could remedy that issue entirely. But even with the improvement in accordion, there are a few glaring issues with the remainder of the album.
I am not one to criticize an artist for how he chooses to perform harsh vocals. However, here the vocals sound halfway between the Lemmy rasp typical of hard rock, and a black metal rasp being sung. In all honesty, if the harsh vocals were a bit lower, they would blend fairly well with the alternating clean vocals. But the two can sound dissonant at times. Also worth noting, is when the clean vocals have a harshness twang, as heard on tracks like “Whitejack”. Here, failings of the harsh vocals seems to be more due to the vocalist singing in the upper registers.
Of course technique, songwriting, and the instrumentation will mellow out across albums however one can definitely make the case that this album comes across a tad amateurish for a debuts. Nonetheless, there is a lot of potential here. While they classify themselves very specifically it is easy to see the strong Ensiferum influence. Tempest of Time is well worth a listen for fans of Epic Folk Metal and Melodic Folk Metal despite the issues discussed, and I look forward to hearing their development over time.