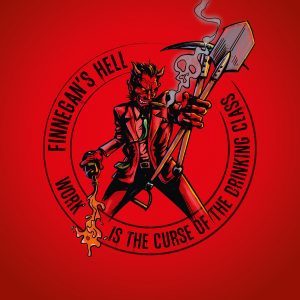 Finnegans Hell is a band that needs to be played loud to be fully appreciated. Drinking would also enhance the experience. Like the best punk bands across the planet they bring the party with them and its an exuberant fun time. I had the privilege of reviewing the bands last effort as well and I very much enjoyed the music then and now. The band knows how to take an interesting turn of phrase and turn it into a full blown anthem complete with unique music passages driven by banjo and accordion. Hailing from Sweden they credit bands as diverse as The Pogues, Black Sabbath and Metallica as influences in their music and the music itself, while mostly remaining in the Celtic Punk and Folk Rock worlds does show a wide range of influence. There are passages that hint at the Ramones and the Pogues while mixing in Ska, rock and even elements of Metal. I don’t think this album can be fully appreciated with a casual one time listen it needs a little time to marinate your brain and make its way into your consciousness where it will stay and haunt you. The Last Dance in particular has made its place in my thoughts where it will loop indefinitely. Songs Like “Work is the Curse of the Drinking Class”, “Whiskey Rum Gin and Wine” and” King of the Bar” cement the bands legacy as a bar legend while “Six Feet Under” and” When I’m Dead” proudly echo the best of Celtic Anthems and the band really takes on some different styles in songs like “Parasite” and “the Last Dance”. The album is short and songs are in the 2 to 3 minute range. Production and mixing seem to be impeccable and for the best enjoyment should be played loudly. Dropping just before St Patrick’s day this should be played proudly at many drunken parties. If I have any critiques I would say the album is a little short, but its quality over quantity and that more than makes up for it. Just play it on repeat. Im looking forward to the future of this Great band . Slainte!!