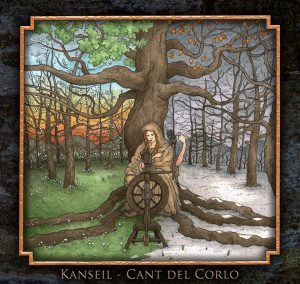 I’m going to get straight to the point and say that, other than the rather brilliant Verta, which brought to my mind French Celtic Folksters, Tornaod, the rest of this EP was a bit low energy for my tastes. I couldn’t shake the feeling that this is an acoustic Rock EP masquerading as Folk Rock.

I will freely admit that I had no idea that Cant del Corlo was an acoustic EP when I started to listen, so it wasn’t at all what I expected it to be, but once I realized this, I was hoping that Kanseil would take a leaf out of Eluveitie’s book and dazzle with a fresh acoustic take on their style. To be honest though, much of the EP sounds a little dull, lifeless and lacking energy and passion. I don’t really think Kanseil have a natural affinity with folk music, rather they are a Rock / Metal band who embellish their music with a Folk garnish. I think that true Folk musicians can capture a certain feeling and touch the listener’s ancient soul, especially so when playing acoustically and I think that was something which was missing here.

I’m absolutely certain, though, that ‘Cant del Corlo’ will appeal to many readers of this site and may get better with repeat listens, so I can only apologize for not really getting it. Maybe Kanseil were just unlucky to be saddled with the wrong reviewer on this occasion. That said, Verta has found a place on my favourite Folk songs playlist. Silver linings and all that.