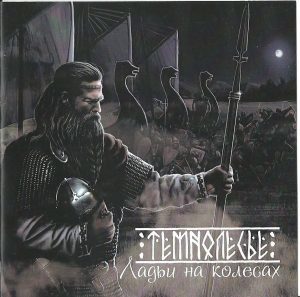 First off, I did review the first full length release from Russia’s Temnoles’ye and I believe I actually had downloadable tracks, as opposed to this time around only receiving a Youtube link. Not too happy about this as it makes it slightly more difficult to get into having no separation in tracks or track listing for that matter or other way to listen. In any event, this is their 2nd full length and as far as I can tell will be independently released. I have seen various translations of the album and I am going with “Shallops On The Wheels”…..”Shallops” being ships so looking at the cover I would say “Ships on the Attack?” Not really sure on that but let’s go with it. I thought the first album “Skazaniya” was promising and the 2nd album is definitely even more so. While I had issues with comparison acts on the first album, the new one has a better-defined sound and I think a comparison to countrymates Grai is a really strong one with better use of male/female vocals and a refinement is style/direction. My previous comparative acts (Thy Worshiper, Paganland, Negura Bunget) may still exist but in much lesser roles. There are a few reasons for the altered sound….namely some major changes in band members. I would say that they haven’t drastically become a different band, but these tracks feel more cohesive and less cacophonous. Lyrics as before are in Russian but without title listing, I can’t really tell you subject matter. There is a nice blend of heavy and subtle, trading off of vocals and some very cool instrumentation choices. The whole album is just over 33 minutes so a nice concise package. I think the mix maybe a little to bright for the most part…….some parts were much more upfront (vocals namely) and sounded semi-disconnected from the rest of the track but still a reasonable overall sound. I think this is a definitely a step forward for Temnolesie (which I believe is now the correct spelling to use in English) and one which could get them some more attention in the folk metal scene.