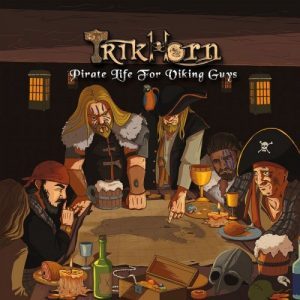 ​Trikorn​ was releasing with “Pirate Life for Viking Guys” their second full length album on the 01.02.2020.​ So what does​ Pirates have in common with Vikings ? There can only be one thing: drinking, drinking and once more​ drinking. Therefore the album is hitting off with a typical pirate folk​ metal song “Pirate Day”, which​ is​ about the typcial stereotypes of​ a pirate’s life:​ drinking, chanting, stealing, fighting and​ drinking again​ :-)The next song “Brotherhood in Alcohol” is continuing​ with the​ main topic of this record.​ As influences of their music Trikorn is​ mentioning Alestorm, Turisas, Korplikaani, Ensiferum and Eluveitie, while I can only try to make a connection to Alestorm (if any at all). With​ “Viking Heart” they are trying to bring in a little bit of Viking Metal in adding​ some growls to the “sound like a pirate” clean vocals, but the structure of the songs​ is not changing.​ When I was​ the first time reading the name of their album and saw the​ logo including​ the Hammer of Thor, I was​ thinking that this could be interesting, but to be honest in my opinion this is just a gadget, maybe to​ receive more attention. In the end Trikorn is serving you from the beginning to the end a typical pirate metal record with no real innovations.​ I would say that​ some songs like​ “Sandoo Island” or “Funny Guys” can be quite entertaining, but sometimes you can​ hear that there needs to be done a lot of improvements​ on the production side.​ I guess seeing this band live must be a lot of fun. You can decide by your side ” Are you funny guys ? “,​ Trikorn are Funny Guys 🙂 ​ ​ ​ ​ ​ ​ ​ ​ ​