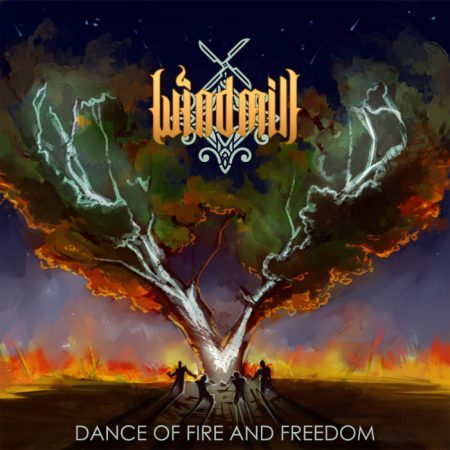 After a recent experience with another review with no supporting information/materials to refer to, it is nice to see that a band supplies us with tons of promotional goods for a change. This is a debut album so if this is how they do things even before listening they have their act together. Poland’s Windmill have been in existence for a few years now (2016) with no previous demos/releases that I can find until this their first full length in “Dance Of Fire And Freedom”. Independently released in January, the album features 11 tracks and 49 minutes of tuneage. While it has been semi-quiet lately for Polish folk metal releases, debut albums have certainly done well with acts like Merkfolk, Helroth and Velesar all charting on our top debut lists from previous years. Windmill will absolutely be joining that club for me this year and based on how obsessed I have become with this album recently, this quite possibly may be my top debut of the year. Why is that? It is kind of hard to describe as are most of those albums that really stand out for me. While it has a lot of elements familiar to most (mid paced and up-tempo tracks, folk instrumentation, catchy riffing., etc…) Windmill have put together tracks that seem very different from each other and an overall style more unique than most. I would say that Wandering Oak might be the closest comparative act that comes to mind with a less thrashy and more folky vibe. While they are self-described as progressive folk metal, I would say that might be a tad pushing it as it is not as technical as some, but it still works as a starting point. The tracks/lyrics have both clean and black/death vocals which are in Polish with one exception in “Embers” which is in English and while this normally doesn’t work with most acts, this foray into it definitely doesn’t lose anything with the change. Going back to promotional materials for a second, Windmill enclosed all of the lyrics with translations which added another enjoyable facet to the listening experience….not that I necessarily think this is a requirement, I thought the foresight to do so was spot on. Track subject matter ranged from nature to magic to myth and everything in between. Folk instrumentation from what I hear is mandolin and/or bouzouki, mouth harp and whistle/flute which are all performed at various at need be parts of the songs. Digging a little deeper, the band members (Dominik on bass/vocals, Bartek on guitar, Marysia on drums and multi-instrumentalist Jan Kowalski) are all 20 years old and under…what? Putting out this quality of a release so young…? I wish I could have been so focused 30+ years ago. They also had a slew of guest appearances on here…not going to list them but they all helped to create a fine finishing touch to the album. If I had one very slight negative it would be in the overall sound as it does have a little bit of a nasally or twangy tone (I love it in the bass sound though) to it but it doesn’t take away from the performances, writing or overall success of the album. Looking for the future of folk metal has never been so easy to see in this debut from Windmill and I hope that the name of the band (which is a little unusual but they explained it well in the promo goods) doesn’t detract from the fact that this album is a standout in 2020.