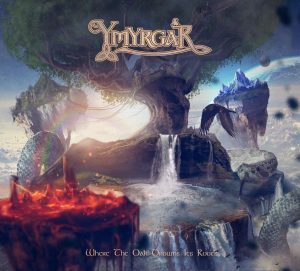 With this second full-length ‘Where the oak drowns its roots’ Ymyrgar arrives from Tunisia with their second album and a hefty sound with influence from European Folk-Metal and enviable quality.

Everything starts with a nice first impression standing out with exquisite cover art. A significant change with his previous album ‘The Tale as Far’ demonstrating an evolution and professionalism that serves as an example to many rising bands. Although we would like to see more often the music of this band -without having 6 years between each release- we can see that time has borne fruit in terms of sound and a projection as artists.

Their sound is melodic and engaging but does not neglect the black metal side, which gives an important personality to its sound. The choirs that accompany some songs are not bad, but some moments may feel that they lower the energetic impulse that the song brings, which can be easily arranged live with some effect or with the same characterization that their performers give -hoping to see this band live to form a more solid opinion about it. This can also be applied to the symphonic choir to make it more numerous and enlarge the feeling it generates.

The guitar riffs and solos are very well interpreted and harmonize very well. It shows that the musical composition has been done with dedication and a lot of talent.

The other instruments have their own moments to stand out and make us forget of the metal genre, then returning with full force with percussion, choirs and electric instruments making this album something special, as if from a complete work of classical orchestral music. Surprising sound direction work that is much appreciated as an audience since it is not a very common resource for the hard work and dedication that requires. Already only for this aspect the band and the production team deserves a great backslapping.

In general it is a great job, which several countries have already enjoyed during their tour this month (February). We hope that soon they will expand their destinations to have the opportunity to see them or at least record a live material to be able to behold all the potential that their sound has.