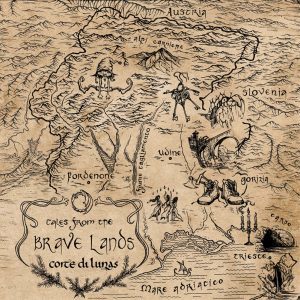 Italian Renaissance Celtic Folk Rock band Corte di Lunas have released their album ‘Tales from the Brave Lands’. The sound has developed over the past three releases from instrumental medieval folk through a somewhat dreamy folk-rock sound. On their previous EP ‘The Journey’ the music had become more energetic. Time to check out this new release ‘Tales from the Brave Lands’.
The album starts with the dreamy ‘Tiare’, which is a nice track, but which will be too soft for most metallers. Corte di Lunas doesn’t short-shift, but they shift to the next gear with the next track. And they do the same with ‘Vida’, but here the song has become a bit more solid. Don’t expect it to be very loud, but here the music has become more interesting for the fans of the folk-rock, the dreamy sound has been lain off. The female vocals by Jo are neat and tidy. A skilled voice, with which all is colored neatly between the lines.
It doesn’t get any louder, so this is music for the lovers of folk-rock, although ‘The Devil’s Bridge’ has a nice riff.
The band continues is this way with lots of folk. Hurdy-gurdy, flute, whistles and bouzouki give it all a very nice feel. There seems to be no intention to go any louder, but that’s OK. Corte di Lunas sounds fine this way. The band has matured over the years, the songs are all of a fine quality. Arrangements are made in a delicate way, giving the listener the opportunity to hear all the instruments in a delicate nice way.

A very nice album by Corte di Lunas. The points I’ve given to this album say nothing about the quality. It could have been a 9.5 or maybe a 10 when it comes to quality. It’s just the lack of the fierce and furious elements which bother me a bit.
But does this mean I wish Corte di Lunas to sound louder? No, I don’t think so. The band sounds nice this way. So, if you can appreciate your folk quite a bit less fierce and furious, this could be something for you.