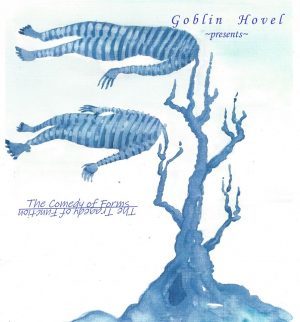 No one quite drops a new album from out of nowhere like Goblin Hovel. When last we left them, ye olde Goblin himself played all the roles with the last GH release with my top EP last year in “Nothing Like Our Fantasy”. That is saying something with the obsession I had over the Wolcensmen EP. Well, now the rest of the fiends (seemingly some old and new) are back in the fold joining Goblin with a new full length in a mouthful of a title in “The Comedy Of Forms, The Tragedy Of Function”. The latest is 38 minutes and 8 new tracks and was just released independently on February 26th on Bandcamp. GH never disappoints and this one is no different, but I would say took me a little more time to get into. I think there is a lot more risk taking on this one and less constraint on the direction of tracks….more of an “anything goes” approach. There is a wide gamut of styles that they have displayed in the past on use here from the dark and romantic to the middle of the road metallic folk to the downright manic. I never really go too deep into the lyrical aspects, but I feel that this album has a more personally inspired overall feel and thus, a more intimate and tangible listen. The phrasing and depth of the vocals may be the highlight for me on this one……from growls, shrieks, whispers, cleans, chorals, harmonies and everything in between they have really gone above and beyond here. That being said, the music/instrumentation is still solid and quirkier than ever….the use of the mouth harp specifically and the arrangements may give this a semi-progressive feel. I tend to like the “heavier” tracks and that is no exception here….”The Red Ones Go Faster” and “Horrors Of The Library” are two that stand out for me in that department. I think the real surprise for me was album closing instrumental “Another Adventure”…..it really caught me off guard and closed the album magnificently. The overall sound/mix has an organicness (if that is a word) with a lively natural feel, making for a very personal listening experience. While I still think Goblin Hovel is an acquired taste on some level, “The Comedy…..” has enough diversity in styles to reach a broader audience this time around….or maybe we are all just catching up to what they have been putting down expertly for years now? Whatever the case, GH still remains unclassifiable and unequaled with yet another stellar album…..just “Another Adventure” seems apropos in describing this one.