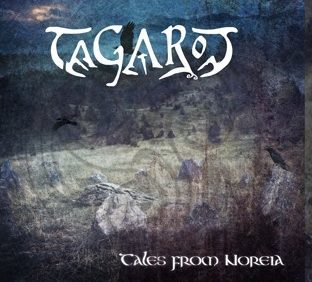 Tagarot was founded by Julian Brockmeier in Carinthia (Austria) in 2011 in order to become an active live Folk Metal Band. All traditional folk instruments such as the bagpipes, irish bouzouki, tin and whistles had been played live and in 2016 Tagarot released their debut called “Veleda’s Prophecy”. Thereafter it became quite quiet around Tagarot and sadly we received the news that all band members beside of Julian left Tagarot due to various reasons. Tagarot became a one man project and finally on the 07.02.2020 the new EP “Tales of Noreia” had been released as a free download on bandcamp and other platforms. Influenced by nature, fanatsy and irish folk the EP is starting with a very atmospheric Intro, which leads us directly to the first track “A Warrior’s Tale”. A quite strong folk metal song with stong vocals provided by Phil Zeo. The second song “Mountain God” continues in the same way. The mixture between melodic death metal mixed with dominant traditional celtic folk instruments make this song as well very rich and powerful. The third song presented on this EP “Forgotten under Limestones” shows us a different side of Tagarot. While the song is starting like the others, there are long episodes of clean vocals, which get mixed with growls and I can only guess that Tagarot wanted to show us some variety in their music. After a short “Outro” the EP is leaving after 15 minutes playtime a thirst for more. Keeping in mind that Julian composed, played, recorded and mastered all instruments and furthermore wrote the lyrics by himself Tagarot is presenting to us a very solid release. The EP was made with a lot of love and the free download even includes a digital booklet with the covers and lyrics. In my opinion this release is even stronger as their debut and I hope that we can hear much more of Tagarot in future.