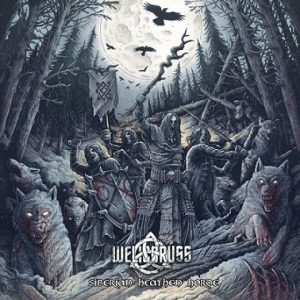 I always have a short list of albums I await each year and the newest from Welicoruss has been on it each year since 2015’s “Az Ezm”. Finally after 5 years the new album is upon us in “Siberian Heather Horde” out on El Puerto records at the end of March. The new album will feature 9 tracks totaling about 47 minutes of music including one instrumental track (“Crossroad Of Life”). Album cover of the year candidate by Theoretical Part for sure with this one and I am anxiously awaiting for a shirt to become available. The album cover was revealed I want to say 2 years ago and that is when I thought it was set to be unleashed but I guess there were some delays in the process. Whatever the case may be, the wait is certainly worth it with a fulfilling and dynamic album filled with new and exciting sounds. Now don’t fear you long time fans…..they have not dramatically altered their sound and if anything refined it to a sharpened edge. Most notably in the change department would be lyrics/vocals in English for most of the album (from what I could tell) which is a departure from Russian on previous albums (while homebase is Prague now, vocalist Alexey Boganov started the project in Russia). They have released two singles/videos (“Spellcaster” and “Siberian Heathen Horde”) and just from those I knew this was going to be epic. While my tendency is to think of them as Pagan Metal, I think they have gotten even more symphonic with this album, crossing into the territory of black metal titans such as Dimmu Borgir and Emperor. They never fall into that area of the keys getting too over the top/gothic which also reminded me a lot of the far too underrated Limbonic Art at points. The tracks are certainly catchy but after repeated listens I began to appreciate how complex and technical they are. Time changes, orchestrations, riffing, vocal layers….tons of various parts going on that reveal themselves. Don’t think “progressive” from the description but very thoughtful and intense. There really is a cohesiveness to the order of the tracks and overall feel and one that really comes thru listening to the album straight thru….maybe like a soundtrack but not necessarily a concept piece. While I tend to like faster/heavier material, I was really drawn to some of the more reserved aspects of the album, showing how diverse and well rounded they are……especially the beginning of album closer “Hymn Of Lost Souls”.  The sound of the album is rich and detailed with gnashing guitar, tight bass and drums, detailed orchestration and vocals. This really is an album that is hard to categorize as it is a genre bending effort and totally unique. Welicoruss have created a one of a kind listening experience and carved a new home with this epic album.