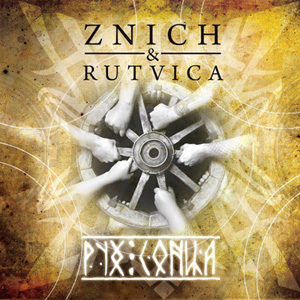 I am still shocked when an album comes from out of thin air for review…. especially when it was released by all appearances 5 months ago. The latest album from Znich is a collaboration with Rutvica entitled “Ruch Sonca” (which I will go with “Movement Of The Sun”) and I believe October of last year was when it was officially released. We have reviewed 1 previous Znich release (2016’s “Slova Ziamli” EP) which got a pretty favorable review but not their most recent previous release (the epic “Corny Simval” from 2017). I have been a fan of this horde from Belarus joining some other kiiler acts from there including Omut, Wartha/Vojstrau and Litvintroll (now reconfigured in Sakramant) so I was glad the new album came through here. I would say I am not as familiar with Rutvica which I would describe as a traditional female vocal group and the two of them collaborating is inspired. The album is relatively short (9 tracks at about 28 minutes) with tracks ranging from just over a minute to just over 6 minutes. When other acts have gone from heavy to more traditional/acoustic or symphonic (Grimner, Skalmold and Baldrs Draumar come to mind) the results can be awe inspiring. Is that the case here? To an extent, yes it is a great collaboration. However, for most of the album there is not as much collaboration as there is seperate tracks by each or Znich acting more like a backing band to Rutvica or each act more solo. I think the case could be made that this is more of a split album than a collaboration with some crossover tracks. The longer tracks here definitely have the most success with both acts contributing their parts successfully and cohesively, especially the 2 singles that were released. I think my issue is that on paper this should be a huge release but I don’t think it is fully realized and could have used a little more planning/writing and more true collaboration. I am not giving up on this as I think it has massive prospects and I would chalk this up as the first foray of many into this unique concept. The sound quality is there and certainly does help with the overall appeal….vocals and instrumentation all discernable and tangible. A decent first effort and one of hopefully many more but still needs a few more tweeks to reach it’s potential.