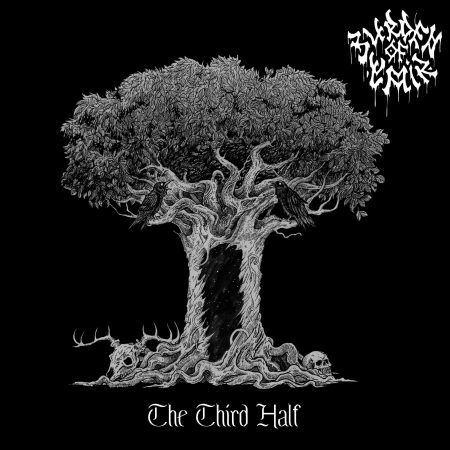 It has been a very productive existence so far for Canada’s Burden of Ymir…. multiple EP’s and a debut album in “Jötnar”, all from 2019. Now, 2020 sees a running Facebook page, signing with a label and a new full length in “The Third Half”. Featuring 12 tracks and 51 minutes it was officially released on April 7th via Black Spark and on Bandcamp. If you have checked them out previously then you would know that this was an instrumental only based project with Dr. Joseph Caswell as the lone member. “The Third Half” see Dr. Joseph still going it alone and now finding his voice (literally and figuratively I guess) by now performing vocals. Let’s talk about the music first which is similar to previous releases in straddling the gap between folk and Viking metal. I still think Varang Nord and Baldrs Draumar are the 2 bands that jump out first (yes because of accordion) but classic Bathory and Mithotyn/King Of Asgard I think resonate with me from a riffing and style perspective. I never really made the connection but another strong similar act would be SIG:AR:TYR…..not necessarily style wise but both are Canadian solo acts starting off instrumental who then transitioned into vocalized tracks. This Is definitely the strongest and most confident release so far and now with the added bonus of vocals. Quorthon seems to be his biggest inspiration in his vocal direction with a shreiky black metal to a doomy deep delivery that works with the music. It’s also great to have accompanying lyrics (you can sing along on Bandcamp) and I guess this could be considered a concept album or at least thematic. Norse mythology is always going to be involved and “The Third Half” is no different with lyrical content. What I appreciated the most is that the lyrics are not overly complicated and his phrasing of the lyrics with his style are extremely catchy and powerful. The tracks are relatively short (2-6 minutes) which makes for easier consumption and a quicker acclimation into the album. I found this to be an enjoyable listen, but I could see how some people could want him to back off on the accordion a little bit and try a few other folk instruments. The sound has the twang that I like and doesn’t shroud the overall vibe…. everything is audible and not hidden. I am certainly glad that Joseph decided to add vocals to the new album and give it the direction it needed to propel it forward. A great new album and one which I think will have a lot of appeal for the Viking metal fans out there as well folk metal fans in general.