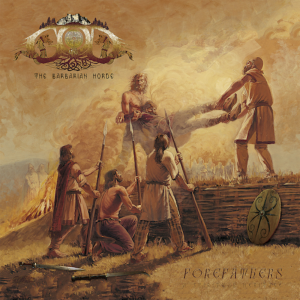 For those who aren’t aware, the latest release from self-styled Barbarian Metallers, GOD, is in fact an infamous lost album that were recorded in Portugal in 2009 under a different name. While two of the tracks have been released previously, this review will look at of the six tracks individually before making some closing notes on the entirety of the album.

The album opener, “The Call of Ancestors”, features really odd audio channels. Something about the keyboard patch used on the track makes it very obvious that a keyboard is playing, which takes away from immersion and takes the quality down a peg. In addition, there’s so much bass on the drums throughout the piece that it sounds like the audio is clipping. In addition when the other instruments kick in they are overwhelmed by the sheer assault of the drums and the piercing flutes. Under different circumstances the same setup would sound amazing musically, but after two trying two different speakers the sound still sounded odd. There is, however, a nice beat to the song, and the breakdown sounds more balanced in terms of instrumental balance.

With the following track there is a general improvement. “Ayle Nectar of the Gods” features a cinematic tavern intro and a sing-along quality that sets it apart as the standard crowd pleaser for the album. As can be expected it is also dominated by folk instruments, except unlike many other similar sounding drinking songs in Folk Metal, the flutes play a much bigger role. “Ayle Nectar of the Gods” does have one downside though, there is a fast portion near the end where the high intensity drumming sounded very scratchy.

Next is the other unreleased track, “The Messenger’s Rite”, it doesn’t have any issues worth mentioning but does much the same as the previous track but opts once more for the more traditional polka accordion driven romp. It comes across like sounding like something Finntroll could be playing without sounding like the track was inspired directly by Finntroll so there’s points for originality.

“The Forefathers” begins sounding a lot like a death/black metal song, but then transitions to a flute driven smooth song with the odd heavy intersessions. Here the majority of the song keeps the start’s more extreme feel. It is very dynamic from a musical perspective and is probably the best song on the album based on that spontaneity

Lastly, “The Code of the Land”, is sung in English with more folk influences than the others, and unlike “Ayle Nectar of the Gods”, this track is catchy musically instead of lyrically. In terms of its lyrics, the song is a bit of a manifesto for the headspace that conceived this album, given that the album is a concept album of sorts. Overall it is not difficult to see why two of the tracks may not have been released previously. It is incredible however, that for all the audio problems, the bass  guitar itself was still quite prominent which cannot be said for all Metal releases. When I first heard of GOD it was in a context of Doom Metal, while I wasn’t familiar with their later work and expecting some Doom influences, the material GOD has to offer on their lost album feels like adding in any other influences would have ruined the content on offer. Unaltered, Forefathers could stand on its own well as a fairly ambitious release despite some possible issues in production quality