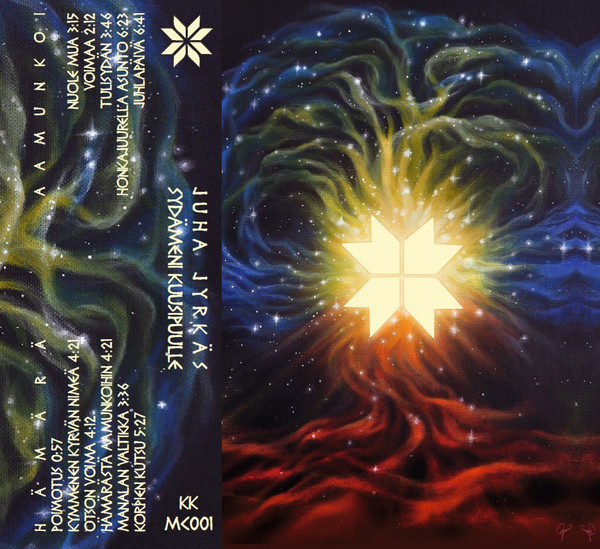 The name Juha Jyrkäs may not be widely known outside of his native Finland but a debut album may change all of that. The author and musician has released an album entitled ”Sydämeni Kuusipuulle” (which I will go with “My Heart To The Spruce Tree”). Yet again, it appears that this is an album we are getting now despite being released in 2019. There is a total of 11 tracks totaling about 45 minutes of tuneage and I would easily say this will be like nothing you have ever heard before. Juha has been involved in projects more familiar to us, contributing to albums by Auringon Hauta and Korpiklaani. He also has involvement in some other projects, most notably Tevana3. If you have heard this project, then you would know what his forte is…… substituting electric guitar for kantele in the recordings. This might blow your mind on how this is possible, but it surprisingly does have a similar sound being electrified. If you are not familiar with the kantele, it would easiest to compare to a zither…it’s basically a stringed instrument that is plucked and is normally acoustic. Juha has electrified it and uses it as the riff maker (guitar) and also as bass with a bass version of the kantele. I have listened to this numerous times and tried to offer some comparative acts…the closest I could think would maybe be some sort of cross between Otyg, Runahild, Goblin Hovel and old Amorphis but probably the best comparison would be to the epic Bergsvriden so it does have a “swampiness” to it. While I would say this is folk metal, I could easily say it could be considered black metal as well. He also handles vocal duties here which are varied from harsh to clean to whisper apart from some female vocals.  Folk instrumentation I would say included would be mouth harp, bagpipe, fiddle and the percussive aspects which are more of a traditional type. Guest appearances from Hittavainen (ex-Korpiklaani), Milla Asikainen, Tero Kalliomäki, Pekka Konkela and Avdakeja Andzshigatova  help complete the album. The lyrics are in Finnish and use everything from mythology to nature to magic as subject matter. I think what does help the overall vibe is the production and choices made in the mix….. it really has a dark, low-fi homemade sound with tons of reverb and other effects that add depth. I think the shorter tracks are more successful here (2-3 minutes) to get the point across and it works with the style/sound. This is a great first effort at going solo but will definitely take some getting used to in terms of the kantele replacing guitar and bass. I feel it does have some limitations in being the primary instrument, but it has tons of potential and will take some time to nurture. Juha has blazed a new trail while taking something known as a traditional instrument and taking it into a new and interesting direction…. great first effort.