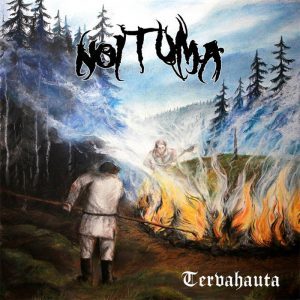 Noituma’s latest effort Tervahauta, from start to finish is highly reminiscent of Helloween’s first keeper album. Despite the stark difference in genres, both Tervahauta and the Keeper albums have an overarching concept but each song sounds almost completely different from the last. Plus, there is a healthy cornucopia of narrative and atmospheric schlock backing the music. Is that a criticism? Not at all, I love the keeper album, and even with no-frills genres like Pagan Metal, the odd interlude is fine as long as it is done well. Admittedly, some songs like “Vainajan Tarina” don’t match the feel of the album, but the real excellence of this album lies not in the composition but in the arrangements.
The violins deserve perhaps the most praise for their versatility across the album. For the first two tracks the instrument is used sparingly, and does not try to muscle in on the heavy and harsh Metal feel of the songs. In “Isle of Ravens”, the violins fill the same backing role a second guitarist would play in ordinary music. The performance on that song is reminiscent of how Turisas incorporates violin driven leads, but the sound is undeniably different. Even on “Hirttopuu” which also lies on the more uplifting and melodic end on the Metal scale, the application of the violins are different from its more rock oriented counterpart, “Isle of Ravens”.
Vocals across the albums deserve praise as well. The style is genuinely tailored to match the feel of the song. For example, you have the full register of death growls between gutteral and banshee, and when called for the singing goes into the mournful baritone many viking metal bands employ. There are also quick changes in the vocal register, which again brings to mind bands like Furor Gallico. Yet on some tracks it was difficult to tell whether it was multiple people singing at the same time or just Vesa Tuomi being layered in the production.
What stands out as the best part of this album is that there are zero formulas being used for the songs. Every song does what it has to, and gets the job done musically. In other words, Noituma knows what they’re trying to achieve with each song and change their approach accordingly. This is a refreshing change from listening to albums where a band either sticks to formulaic songwriting or emphasizes their own style. One could still say that Noituma has their own style, but the existence of “Isle of Ravens” and “Hirttopuu” shows that they are unafraid to deviate from metal when called for (the former is rock and the latter is basically a piano ballad rooted in folk). Obviously there are some marks against them for consistency, especially considering that the songs most frequently mentioned in this review are also the most polarizing. However even the other tracks deviate in the composition. Tervahauta is worth a listen, but Finnish speakers will most likely get the most mileage out of the album, otherwise listeners should be prepared for bland repetition backing narratives in a foreign language.