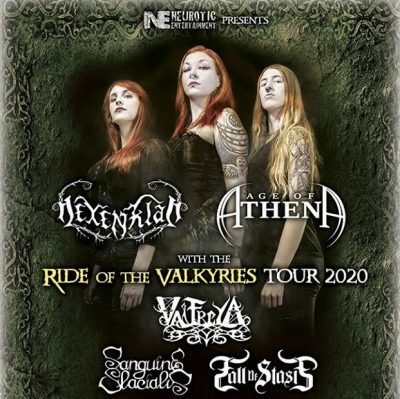 It’s the begining of March in Québec where the wather is warming up and snow is melting.
First on my list is a new theme production : Le FestEvil. For it’s first editions the theme is Quebec City Women Metal Fest as part of the Ride of the Valkyries tour 2020. The idea is 7 bands with female protagonists, following an infernal cadence of shows, each about 30 minutes, in one evening. Pure pleasure guaranteed including folk Black metal, progressive Death metal, Black Death epic folk metal, melodic Death metal and more.

It takes place in Le D’Auteuil theater in Saint-Roch quarter. The hall can take in about 550 spectators, has 2 screens on the wall, a huge bar and a lower balcony covering the back quarter of the hall. The sound under the balcony is a bit compressed but when standing at the end of the hall, the sound rolls out quite clear.   The merch stands of all bands are placed in a small space behind the bar at the back of the hall. The lockers are in basement and they are full since it’s still cold outside! To be able to leave a coat there, someone has to take their coat out…

First band to open the evening is Fall of Stasis, Black folk metal from Montréal. Unfortunately I’ve missed the concert but it appears that they created a very good suprise and the audience was thrilled. I hope there will be another opportunity to see them… They’re followed by Within Embers from Québec City and Uriel from Montreal.
The hall is full of metalheads to it’s limits and it’s Merkabah’s turn, power metal band from Sainte-Foy. It’s an easy music to listen to and the band makes a very good show with a few accessories as a swing above the croud. The public does enjoy the show, there are few fans really into it and probably a few friends of the band as it’s playing in their hometown. Their music brings me back to my teenage years and the band awakes my love of power metal. Congratulations you guys, it’s really a great show!
Sanguine Glacialis, melodic death metal band from Montreal, is not really my favorite even though the death metal part is quit persuasive. I couldn’t integrate the melodic part with clear and a bit of opera voice. But hey, music taste is the business of each individual, so it’s good that there are bands for every one of them!

And finally it’s up to Valfreya to ignite the stage. Valfreya is melodic Black and folk metal from Montreal. It’s this band that made me come in the first place as I missed them last year in an medieval festival and they did not disappoint me. The show is rhythmic and the audience gets more and more alive, even a wall of death is organised in it’s midths. Two members of Sanguine Glacialis play within Valfreya which is not completely in the same style. But it suits really well. The show is too short to plainly enjoy the music but I’m so happy they made it to Québec City! At least one pure folk song is played in french and it works well. Great show really. I leave with 2 new CDs from the merch.
So far so good but it’s getting late for Québec, over eleven! 🙂 it was too ambitious to have 7 bands playing in 5 hours!
Your Last Wish, melodic death metal band from Montreal gets to the stage. It’s a pity that it’s so late ’cause the half of the audience has already left and the band does deserve a full hall. The music is punchy, the show is energetic and the rest of the headbangers does let know how much they enjoy it.
It was a great evening with really good ambiance, good discoveries and great bands. Thanks for the shows and initiative!
Sadly it should have been the beginning of an awesome metal season in Québec but for the moment it has been the closing event for me as well. All upcoming shows have all been cancelled or postponed due to the Corona virus…
Many thanks to bands that have decided to broadcast their shows online so that we do not despond being locked at home.
Stay safe folkers and live loud event at home!