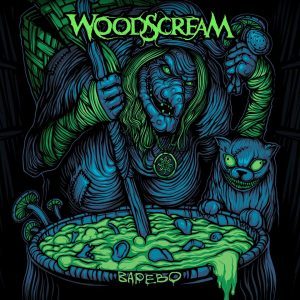 I have been writing for the site now for almost 6 years and was shocked that it has been that long since a new release from Russia’s Woodscream has been reviewed. 2014 was the last release from them (“Octastorium”) and they are altogether a different band now and have finally arrived at the point of a new album release with “Varevo” (which I will say is “Brew” and going by album cover I think it’s close). The album will be released way far from now on June 5th and features 10 new tracks, including the recently released single “Krugovert” (“Circle”) at about 44 minutes of music. When I think of St. Petersburg (their hometown) the out of control/up-tempo folk metal stylings of Svartby, Abracadabra and many others come to mind and Woodscream could have been included on the peripheral edges of that conversation at one time. When I say that, I can remember back when they had a configuration of more members which seemingly has been trimmed down to 4. This may explain the long layoff in between releases. I also remember a crowdfund campaign last year to get the album recorded. In any event, the album will definitely make you want to compare “old” to “new” and I think you will be happy at what you hear, depending on how much you were a fan of the original configuration. The result of the new arrangement is a heavier overall sound, more rooted in other metal styles I believe more so than folk metal but still has some folky vibes. It seems that folk instrumentation for the most part has been replaced with keys/arrangements and by a guest appearance on recorder and zhaleika by Maria Datsenko. The one constant in their sound has been vocalist Valentina Tsyganova and her underrated delivery and she still shines here. The tracks are short (longest being only 4 ½ minutes) so each being a quick listen. I think given the long layoff and new streamlined lineup, I would have thought that a more refined and powerful album would have emerged. For the most part I would say I was underwhelmed by the results, especially if compared to some newer releases we have received here (Arstidir Lifsins, Boisson Divine, Welicoruss and Goblin Hovel come to mind). The tracks are solid but nothing earth moving and lack any real memorable moments. The old adage “less is more” I think does not work for them at this point and they have lost their identity to an extent. The album has a full, powerful sound to it in the mix and does help deliver a better than average album. While still a worthwhile listen, “Varvevo” could have benefitted with some remnants of the older style while blending the change in direction with the revamped lineup.