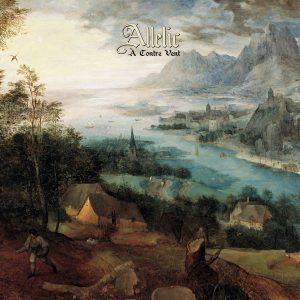 What an interesting adventure Allelic is with the stunning, perhaps watercolor, landscape cover alone enough to reel the weary listener in. The seemingly one-man Canadian collective out of Montreal has one thing down to a science; the combination of old and new, in such cacophony it causes mixed feelings about his second record, A Contre Vent. Kind of like discovering Borknagar for the first time two decades ago, a very progressive ‘Against the Wind’ provokes a similar excitement that often melds into slight confusion.

Obvious modern principles of nature and the cosmos follow the story, written entirely in French, of an ever protagonist canine throughout four lengthy tracks of a 40 minute release. Having not heard Allelic before, an optimistic first listen shows signs of the usual folk instrument suspects, along with mixed rhythms and a comforting black metal essence. Though quickly, my attention redirects towards dissonance. No problem, maybe it’s an acquired taste?…

Fig. 1 opens with an upbeat wooden spoon flurry, swiftly transporting us to some Northeast forest. It weaves between melancholy, ethereal joy and brutality, sometimes smoothly, others abruptly and the moment ‘A l’anaphase de nos chemins’ starts to mimic yet another wolf motif band’s many a passages too much, a welcomed progressive shift emerges. Though, arguably the Moonsorrow nostalgia is a huge factor in making it potentially my favorite track. Fig. 2 claps back to a stormy Metallica guitar pas de deux intro that transitions slowly to a grungy, doom focus and extensive build up with lots to unpack audibly. There’s a brief clean gang vocal appearance, did I already mention dissonance? Before ‘La rupture des chaines’ concludes in an emotional shred fest. My second favorite track also showcases the harsh vocals, reminiscing of perseverance of will and vigor, most notably in an otherwise instrument driven record. Fig. 3 is a much needed, beautifully strummed intermission piece mirroring awareness of the present as my intrigue is also confirmed into charmed presence with ‘L’eveil et la contemplation’

Fig. 4 closer brings us back to the black metal roots with another touch of dissonance as our hero and all the woodsy creatures dance, their souls seamlessly bonding to earth in celebration. In many ways, ‘Des ames tissees sur Terre’ and A Contre Vent in it’s entirety reflect the virtue and viscera of existence. Adding an existentialist feature to help it grow on me.

Indubitably, Allelic has a lot to say. It took me many listens to grasp the melodies and time signatures, with even some difficulty discerning the complete message of-hand. Very much like mushrooms, given complementing circumstances and preferably more harmonized choruses, it’s an acquired taste indeed. This second debut carries huge potential and hopefully an exciting future for the lone-wolf composer.