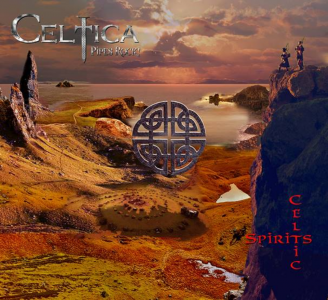 My first real exposure to Celtica Pipes Rock was the Steamphonia album. As a fan of both Steampunk and Celtic Folk music, it seemed to me like the perfect combination. While there might be a degree of subjective bias, Steamphonia will be the point of reference here, because that album features the traditional celtic music employed in the most novel, creative, and original way when examining Celtica’s back catalogue. Now onto the album at hand.
Celtic Spirits is as good as it can possibly be while staying fairly safe. However, staying true to what one’s band is known for is by no means a bad thing. Celtic Spirits as usual features the traditional Folk tunes adapted for the four piece ensemble, the soaring cheery sound of the wailing bagpipes, and some good atmospheric effects every other song. But it would be a lie to say that this album sounds like another typical release, Celtic Spirits has kept the grandiose ambition of Steamphonia and taken the atmospherics and orchestrations just those few steps further. Firstly, the album uses chorals extensively. The choirs themselves sound like a church choir trying to imitate a host of angels, and when employed for the purposes of immersion, as on the title track, it does help the listener feel as if they’ve been guided through scenic highlands by the cries of, dare I say. celtic spirits? On the other hand, the choirs can also pull off the typical ominous latin chanting used in extensively in genres like Symphonic Metal as can be heard on Ferrum Noricum.
There are some unusually dark parts on this album, for a band like Celtica Pipes Rock, when compared to their usual upbeat wailing. There are war drums and some eerie music opening the title track, and “Old Man of Storr” is even darker, compared to the rest of the album. Additionally, while Celtica isn’t known for having the guitars feature heavily, there are some interesting efforts to have the guitar to play a key role on some songs, but in general it appears as if its either the guitars or the pipes dominating, and the other instrument holds back. Granted, there’s usually only one main focus in music, but the excellent adaptation of Beethoven’s 9th on “1770: Birth of a Giant” shows that there can be an interplay between instruments. One standout track, where the guitar plays a major role is, “Time to Rise”. This song is the closest Celtica will probably get to Heavy Metal with some heavy riffs delivered on a distorted and powerful guitar.
What sets this album apart from Celtica Pipes Rock’s back catalogue, is though Steamphonia had been a groundbreaking concept album and set a high bar for originality (with the bagpipes conjuring a steampunk soundtrack without soundboards or electronic workarounds) Celtic Spirits feels like it manages to pull off something similar. It has a captivating and enchanting atmosphere that with choirs and the usual charm of the bagpipe sound of Celtica evokes great highland landscapes and historical scenes, which is at its core what made their steampunk concept album so good. For those who enjoy immersive music, this album will be an excellent listen and there is no doubt that Celtic Spirits will be indispensable for any fans of Celtic Music.