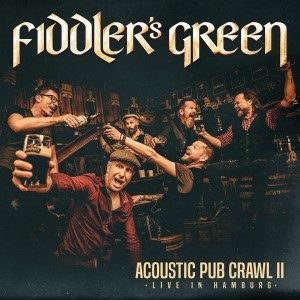 Fiddler’s Green released the follow up for their ‘Acoustic Pub Crawl’ album. This one has the subtitle ‘Live in Hamburg’.
To start with a no-brainer: Everything coming out of the hands of the German speed-folkers is off very good quality. In my opinion they belong to the big 3 in this genre. There are more very good bands out there. But in this genre Dropkick Murphys, Flogging Molly and Fiddler’s Green are ruling them all.
There was never a dull moment with Fiddler’s Green, but the last studio albums were all top-notch. The bands wrote lots of very nice songs since the release of their first Acoustic Pub Crawl album in 2012. No wonder the band decided to make another acoustic album.
I’ve visited many Fiddler’s Green concerts and they’re always guaranteed to be a good party. Of course the dynamics of an acoustic concert are slightly different, you can sense that in this album as well. The bands has lots of lots of fans in Germany and surrounding countries and they’re always in for a folk-punk party.
The songs aren’t that different form the usual versions, but of course they’re played acoustic. Like usual this means they are a bit more open, it’s not all sealed with electric guitars and drums. It’s easier to hear all the stuff which is going on in a song. And this is something where the quality of Fiddler’s Green comes out well. They play their acoustic instruments with ease, so all songs come out fine. Personally they could have more re-arrangements of some tracks, but that’s obviously not their goal.

This makes the ‘Acoustic Pub Crawl II’ album a very nice album when you want to listen to the songs in a less energetic situation. I always like to play my music loud, but there are circumstances when this is not recommendable. In these circumstances this is a perfect album to listen to all these great songs without blowing your roommates out of the room. So, you have a choice now: New roommates or listen to another acoustic Fiddler’s Green album. Good album for such moments and of course for all the people who joined FG in one of these concerts or the fans who want to have them all.
Not the best Fiddler’s Green album, but since everything they create is of high quality, it’s still a very good one!