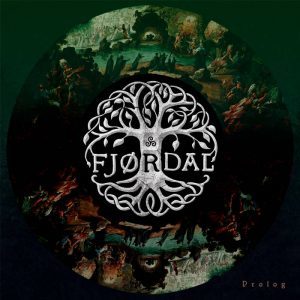 Fjordal is a Folk Pagan Metal Band out of Dresden, which is presenting us with the​ EP “Prolog” their debut release. The five-headed band has already been founded in 2016 and during their young career they already could gather some live experience​ playing various gigs in Germany. Basically Fjordal is delivering on their first release mainly harsh​ death metal combining hard riffs with an accordion, sometimes bouzouki and flute. With​ a very short​ Intro with howls of wolves the band immedialtey leads us to the first track “Trash” which is already showing that Fjordal is​ following their own direction without trying to copy any other bands, which are using the accordion as a main folk influence​ in their songs. The lyrics are kept in English and the vocals are ranging from growling to gutural growling :-). The music is hard and aggressive, but still gives​ the folk elements enough room not to come to short. Already in the first song you can find some slower and more​ harmonic parts, which are giving​ the accordion more room to develop. The next song “Trollmarschen” is beginning a little bit slower building up more atmosphere with female whispers and rhythmical accordion parts in order to explode in heavy guitar riffs, chants and a full load of death metal. Also​ “Dead Winter” reminds me on a typical melodic death metal release with,​ with the only difference that you always have the​ folk elements set rightly into the harmonies, which makes it​ sound​ brilliant. After a short interlude “Verdunkeln” their own style of Pagan Folk Metal continues over “Mordred” to the last song “Old Enemy Arises”. Personally I think that Fjordal is delivering with those 5 songs plus the Intro and Interlude a quite solid 24 minute debut. Furthermore they are paying a lot of attention on their online presence having this release already pushlished on Spotify, iTunes, Youtube, Bandcamp and VK (Deezer and Amazon Music to follow!). Congrats for your debut and looking forward to hear more from you!