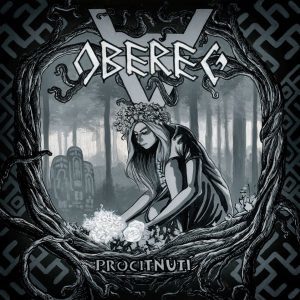 While the Czech Republic has never been a hot bed of folk metal activity, acts like the transplanted Welicoruss and Cruadalach have made big impacts with their latest albums. Obereg are hoping to join the ranks of these stellar acts with their 3rd full length entitled ”Procitnutí” (which I translated as “Awakened”). I believe this will be independently released and features 8 tracks at just over 33 minutes and was issued at the end of April. Looking into our archives we did review the previous full length (2017’s “Po Stopách Předků”) and it got a less than stellar review. How does the new album fair? Possibly slightly better than the last and I am going to try and give a few reasons for the disconnect. First off, their configuration is 6 members, including male and female vocals, guitar, bass, drums and flute….sounds promising right? It certainly has the potential, but they never really take advantage of the various parts. For an example, I felt that the tracks lacked energy at points and just when you think it could break loose (especially going up tempo) they opt to stay in the same general area/tempo. I just reviewed another album that had tempos that were not fast compared to previous efforts for the most part, but that was a non-issue with aspects like layering instrumentation, vocals and more interesting choices made making up for it. The song structures seemed to be somewhat overly simplistic and ones that have already been done before. I also found the track selection to be somewhat strange. While the intro instrumental is way overdone, at least most acts keep it relatively short. Obereg have chosen the instrumental “Jho” to open the album and at 4 ½ minutes really doesn’t make sense to me….. maybe a shorter version or put this somewhere else in the album? There are a few successful tracks here….”Sámo” really take advantage of what they have with a more up-tempo beat, harmonized vocals and it happens to be the longest track here. I am OK with slower tracks but there has to be some energy or direction. Lastly, they really overused the flute in being the main riff instrument here and it loses impact hearing it all the time throughout the album….I think scaling it back would have had better results. Overall, this isn’t a bad album, but it isn’t anywhere near the top of year list for me. The sound is decent but also lack a little bit of a punch to try to help create a more exciting listen. ”Procitnutí” has some nice parts to it but it certainly could have benefitted from some change of pace and diversity.