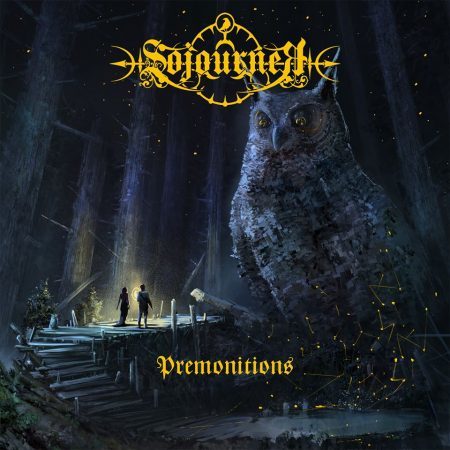 Napalm Records has certainly been on a hot streak with recent signings especially when it comes to folk metal related acts. The epic Æther Realm have offered their initial Napalm album and the equally epic Sojourner are also poised with their debut for them (when is this tour happening…hello?!). Titled “Premonitions”, the 3rd full length from this international clan will feature 8 tracks at 56 minutes of tunes. There have been 2 singles already released (“The Deluge” and “Fatal Frame”) and it looks like success hasn’t altered their sound in the least. If anything, a more thought-provoking set of tracks have been put together on “Premonitions” than on previous releases which is saying how strong this album is. For fans of the melodic death connected style of their sound, there will be enough of that on here to satisfy. However, the tempos for the most part have slowed and are less frantic but at the same time they have created more mood and just a better and accessible listen. The layers of vocals/instrumentation are still abundant and not as symphonic while being more plotted and I would say easier to grasp and feel. Keys, piano and whistle are plentiful, and I think define the album more than ever. Don’t worry there is an ample supply of intertwining riffs and a solid rhythm section to satisfy all. Given the various locales of the band members (UK, Sweden, New Zealand and Italy) it is amazing how synergistic the album comes across. The vocals tradeoffs are still another huge part of the album with Chloe Bray and Emilio Crespo sharing duties as solidly as ever with each becoming more confident. I am sure given the overall more chill vibe to the album, I fear the dreaded “commercialized” word will start to be thrown around and I would say that would be completely unfair. I would say “maturation” would be more appropriate and accurate. There is less a need to impress with tons of extras and keeping it simpler has made this more impactful. From the opening notes of “The Monolith” I think it will become apparent there is a different feel to the album. Once again, they have tapped the incredible skills of Oystein G Brun and Crosound Studios for mixing and mastering and he nailed the sound and mood. If there is one act I had to put my money on to be “the next big thing” it would definitely be Sojourner and deservedly so. “Premonitions” will be on many a top album of the year lists for sure and shows Sojourner taking flight into loftier heights…… great album.