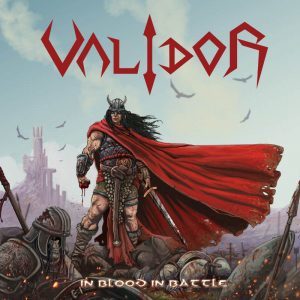 Despite a somewhat underwhelming start, Validor’s latest effort combines all the best of Pulp Fantasy, warrior sagas, and good old no-frills heavy metal riffs into what ends up being a promising Power Metal album, in the same vein as the auld “True Metal” strain of that particular genre. Before continuing with the review, let me say there isn’t much in the way of conventional Folk Metal on this specific release. Although there are some folksy elements present, both the music and album are firmly grounded in a more traditional Heavy Metal mould.
The biggest praise I can give this album is that it is unconstrained by the standard songwriting templates that many bands typically employ. Even some of the less conventionally written albums I’ve found typically stick to the guns of their respective genres. Validor’s dynamic songwriting does not make the band immune to plodding repetitive rhythms however, as “The Last Emperor” illustrates with monotonous drumming for part of the song. While there was significant variation within the song, the keyboards at the beginning sounded fake and plasticky, given the how the keyboards straight up synth would most likely be an equally fair option. Aside from this one weak link in the album, the only other places where the songwriting truly ebbs is on parts of “Stealer of Souls” and “Wrath of Steel”. On both songs there is a tendency to recycle the same notes. However, neither song truly flops, especially not “Wrath of Steel” where truly barbaric lyrics are delivered in a way that resembles a rougher take on Manowar.
I’m personally on the fence about the vocals. Odi Thunderer is clearly a capable vocalist, as demonstrated with his style on gritty style on “Wrath of Steel” and his varied abilities. On various points of the album, he shows the ability to growl, or do a more folksy keen on the Mediterranean sounding acoustic guitar on tracks like “In Blood In Battle” and “Riddle of Steel”. However it does feel that given the amount of personality and character vocalists in both Power and Trad Metal bands have, Odi falls a bit short of being truly memorable. While he has shown some personality (those dreary Romanesque classical guitar interludes does need equally dreary voices after all) he does not distinguish himself as much on other parts of the album.
Now onto these oft-mentioned acoustic guitar segments. Throughout the album there is a tendency to lapse into acoustic, vaguely Italian sounding guitar melodies whenever convenient. These interludes are done exceptionally well and are so well written that they sound purely like the classical guitar music I was exposed to as a boy. The fact that the Metal and the Folk can no longer be separated is something that complicates making simple analysis of the music. However whether the instrumentals belong or not, they blend into the rest of the music well and never overstay their welcome. The musicians’ training in classical music bleeds over into the solos, which in several cases have these incredibly melodic neo-classical leaps between scales that would make Luca Turrilli proud. The classical sensibilities compliment the heavier riffing well, although one might ask why, if the acoustic segments and solos are well-written, the riffing looks one dimensional in comparison.
Bands like Validor aren’t meant to be listened to cerebrally. Its just good crushing Metal with hammering riffs and macho lyrics. If you’re into the aforementioned style of Power Metal then this is definitely for you. But for those expecting Folk Metal, sorry, there’s Folk Elements but Validor’s latest release might not be it.