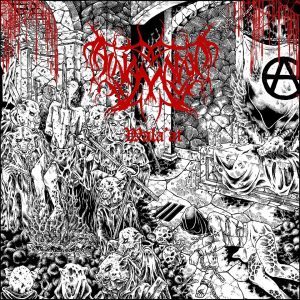 When we review albums here, we get to pick which ones we are interested in writing about. You can also see that by no one picking it that there are some albums that no one is interested in. Sadly, I saw the latest from Al-Namrood sitting there for quite a while and I understand why. Our last 2 reviews of their releases (1 by me) were not super positive but I decided to give the new release a go and I am happy to report this is easily is their best album to date. Entitled “Wala’at” (which I believe translates to “Loyalties”) the album features 10 tracks at 36 minutes and was released officially on June 22nd via Shaytan Productions. Based in Saudi Arabia, I must once again give them credit to doing anything musically, especially extreme music wise as I think we all know that in that part of the world it is a risky proposition. So, on to the review…..what makes this different than the previous releases? I thought on the earlier album what I heard seemed forced and very haphazard and just hard to get into…..the desire is there but the parts weren’t. Unlike other middle eastern based/influenced projects such as Nile, Melechesh or Orphaned Land, Al-Namrood really didn’t have their sound defined and I think they finally have a style that fits and works. I think I hear more of “punk” attitude and a more simplistic approach…..the cover certainly seems to convey a more anarchistic approach. I still think that Celtic Frost, Bathory or old Mayhem mixed with distinctly middle eastern chord progressions works as a basic description. The vocals I think may have been one of the aspects of their sound that needed the most work. With the change in style, the vocals seem to blend much better and carry the message. Speaking of message, the lyrics are in Arabic (presumably) and despite my best efforts I couldn’t get translations of the song titles but let us guess that they must be heretical or blasphemous on some level. While I don’t believe there is really any folk touches to really speak of, I think the album still is worthy of a listen. Mix and overall sound is aggressive and thrashy which adds an extra bite to the listen. After 12 plus years of existence, it sounds like Al-Namrood have landed at a spot where they can succeed with their redevelopment in their sound.