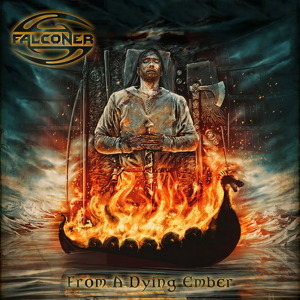 Many critics of Power Metal point to the escapism and the somewhat generic themes many of the bands feature in their lyrics exciting or epic though they may be. Many readers are no doubt familiar with the love/hate effect bands like Manowar and DragonForce incited with many listeners and the occasionally formulaic music of bands that are sometimes labelled Europower. Fear not dear reader, Falconer is the most singular denial of most of the common criticisms of argument. Falconer, for those unfamiliar with the band, is a Power Metal band from Sweden that does adhere to the minstrel imagery, and the pseudo-fantasy lyrics, except Falconer takes it further and veils social commentary and satire within the usual bardic pageantry. After six years, they have released a new and topically relevant album, the lyrics of which will not be analyzed extensively, for the purposes of neutralhity.

Right off the bat, one finds the two uplifting anthems released as singles. Of the first half of the album, these two are perhaps the only tracks that never plod along monotonously, at one point or another. Granted, there isn’t anything groundbreaking or progressive on either track. However considering the message of the song and the anthemic feel of both “Kings and Queens” and “Dessert Dreams”, I doubt that there was any attempt to spin a grandiose symphony in eight movements, or the like. It is perhaps fitting that the songs are catchy and uplifting, because with all the uncertainty world its easy to forget to think about the future (as “Kings and Queens” seems to encourage) or forget that other people can experience the same kind of burnout.

While there are some nice additions, like the stereotyped bardic tune about the jesters and scepters on “Redeem and Repent”, the rest of the tracks (with the exception of “Bland Sump Och”, in itself remarkable only for sounding like a traditional nordic tune), lack the same energy and commitment the openers had. The lyrics themselves are very rich in allegory, and rife with social commentary, but the instruments and the singing feel a bit underwhelming. Which brings us to the saving grace of this album: the embellishments. From a Dying Ember is the first major Falconer album that uses the flautists, the pipers, and the conventions of the Bardic flavor of the Folk Metal they always danced around to such a great effect. In all honesty, for a band have the larger than life spirit of Power Metal to the same extent as some of the more poppy or divisive bands, the choice to mature the music through fully embracing Folk influences, makes tracks like “Garnets and a Gilded Rose”  and “Regal Attire” so much more enjoyable. Take for example the stringed instruments playing the intro to “Rapture”. If those were taken away from the song, and if the folk elements were stripped away entirely, the remainder would just have been pretty sombre Power Metal.

Overall, I don’t think this album is a major change in quality for Falconer. The music was enriched by some of the influences brought in, but this is what I would expect from a Falconer album. I’d recommend this as one of those albums the majority of open-minded listeners can listen to and even relate to. This is also an album that could arguably be used as a primer for both Folk Metal and Power Metal. Yet in the that regard it is held back only by virtue of how singular the music of Falconer is.